Ulster coach Dan McFarland praised his side after they went level with leaders Racing 92 in Heineken Champions Cup Pool Four after their bonus-point 30-15 win over the Scarlets at the Kingspan Stadium.

It was a result which brought the Ulstermen maximum points from both back-to-back games and their third win from four rounds came off the back of 15 points, a try, two conversions and two penalties from John Cooney as well as two Iain Henderson tries and a score from Jacob Stockdale.

The defeat ensured that the Scarlets cannot qualify from the group after making last season's Champions Cup semi-finals.

Their points came from tries by Jonathan Davies and Tom Prydie, with Rhys Patchell kicking a conversion and a penalty.

"I'm really satisfied with the result, obviously five points and 10 points from two games against the Scarlets is a situation which any team would be pleased with due to the quality of opposition they are," said McFarland.

"In terms of the performance there was lots in that that we'd be very happy with.

"We were a little bit disappointing going in at half-time [Ulster led 10-3] in the fact that we hadn't pushed the game on so there was an intensity in our defence which wasn't quite at the level we wanted it to be." 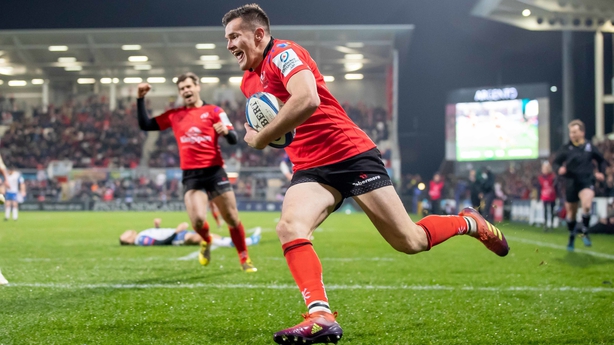 McFarland also praised man of the match Billy Burns who provided an assist for Ulster's second score from Stockdale and was accurate with his tactical kicking.

"Yes it was very good," said McFarland of Burns' kicking from hand.

"We went into the first game talking about being able to play a good kicking strategy against them and there aren't many players better at it than Billy.

"It's just a question of the decision making around that and I thought Billy was really good and played really well."

Scarlets coach Wayne Pivac, whose side have now lost all four pool games, admitted that his squad were already focusing on the Pro14.

"We had an eye on next week with some of our subbing and obviously we have three derbies and that's a big part of our season now," he said.

"We have to focus on the Pro14 and accumulate enough points for the end of the season."

Reflecting on a poor European season the Scarlets coach said: "The campaign has been very disappointing. We had the highs of last season and we've been trying to replicate that this season but we haven't been able to do it.

"This time around we're on the receiving end but we've got to work on the PRO14 and there is a lot of resolve in the group and we'll take the positives out of our first half performance and the defence which was a step up on last week.

"We now have to work very hard to focus on the Pro14."