Tadgh Furlong expects Bath's attack coach Girvan Dempsey to have a few tricks up his sleeve for their trip to take on Leinster at the Aviva Stadium in the Heineken Champions Cup this Saturday.

Dempsey left the Leinster coaching ticket at the end of last season to take up the role across the water and would have offered the Premiership outfit a unique insight into how the reigning European champions operate ahead of their clash at the Rec last weekend.

Leo Cullen's men got out of that one with a hard-earned 17-10 victory but it was far from plain sailing. And Furlong expects another rocky ride in Dublin.

"Girv came up with good starter plays for them," he told RTÉ Sport's Michael Corcoran.

"I'd say he did some stuff off the lineout and their set-up and defence that put us under pressure and made us think. He knows us incredibly well.

"We're probably expecting a few more tricks or solutions to some of the threats we pose this weekend."

Furlong admitted his team failed to fully fire against Bath. Jordan Larmour's interception try early in the second half meant they shaded a tight Pool One encounter but there was much to pore over this week in the post mortem.

"We didn't play the way we would have liked, through our own inaccuracies and also some really good play by Bath. You're in a unique part of the season where you play the same team back to back. We're raring to go for the Aviva on Saturday. 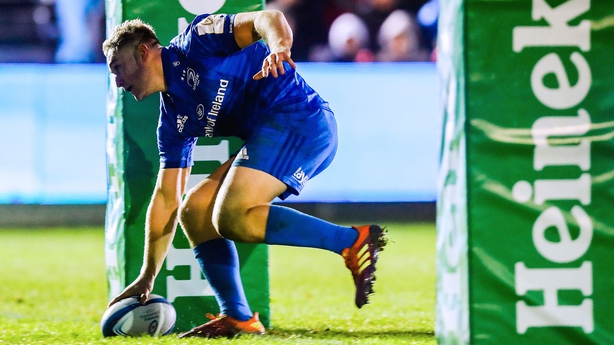 "You take your learnings from the game that little bit more. It's a busy week in the video analysis room. It's a tough thing to do, win away in Europe, wherever that may be. [The Rec] is a unique venue. Conditions made it hard at times. It was challenging for both teams.

"I think they came away with eight steals, which is never good, and never that satisfying for a tight-five forward particularly.

"It is kind of knockout rugby for us at the minute. We can't afford to lose a game. With knockout rugby you're putting one foot in front of the other and trying to keep pushing on. You can't take your foot off the pedal."

A return to Dublin in front of a packed Aviva should help. It's a sight Furlong never tires of, or takes for granted.

"Playing at the Aviva, it's one of those special days out with Leinster, " he added.

"For Heineken Cup days, the day is structured a bit different. We meet at the training facility and we bus it down.

"I think that bus journey to the Aviva, seeing your fans on the way there, the atmosphere they bring and the way they support us through ticket sales and noise and atmosphere, it makes for a special occasion."