Munster head coach Johann van Graan paid tribute to his squad for the way they adapted to the late changes to the starting line up for the Champions Cup game against Castres.

A tight hamstring prevented Joey Carbery from starting alongside Conor Murray so JJ Hanrahan stepped in to the fold and gave a man-of-the-match award performance.

Chris Farrell also pulled up before the game, he was replaced by Sam Arnold and Jaco Taute took his spot on the bench.

"It was a big disruption for us losing those two guys but also it's a testament to our mindset that it was just next man in,"  van Graan told RTÉ Sport.

"I thought all credit to our team, right before kickoff there is going to be a change and they just adapted.

"I’m really glad for Sammy (Arnold) and especially JJ (Hanrahan) with a man-of-the-match performance he was excellent.

"I thought we started the game really well. We left one or two opportunities out there in the first twenty in the power zone we adapted our plan a bit more at half-time and I thought we managed that second-half pretty well." 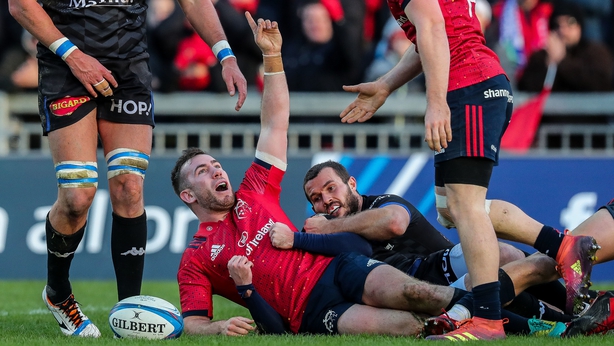 Munster's win puts them back on the top of Pool 2 and they will play Castres in the return fixture next Saturday and although they are in a strong position van Grann isn’t looking too far ahead.

"The fact that we won tonight is good, it’s a home win we need to win our home games. We are in with a chance next week and we will put our effort and focus into that.

"We are in  a good position but we are only at the half way stage of the pool stages a few massive games ahead."

With their game just six days away the injured players will be in a race against time to be fit. As it stands it’s too early for the Munster boss to tell if there will be enough time for Carbery and Farrell to recover.

"It’s difficult to say, Joey was tightness, Chris was upper leg tightness, it’s early so we will have to see.

"It’s Sunday now we play on Saturday so we will leave it to the medical team to see later in the week, hopefully we will have them available but like we said today we want to just manage our squad."