Connacht head coach Andy Friend joked that his wingers had hypothermia and the Australian contingent were left scratching their heads after the Westerners scrapped past Perpignan in awful conditions at the Sportsground.

A howling wind and driving rain kicked in off the Atlantic and battered players and supporters alike in the Challenge Cup clash on Saturday afternoon.

If it was a shock to system for some of the home players, spare a thought for the visitors who'd travelled from the south of France, though Perpignan - bottom of the Top 14 - deserve credit for making a game of it in the second half.

Connacht ultimately prevailed 22-10 to go second in their pool, behind Sale Sharks, and notch a fourth win on the bounce. But it wasn't easy. 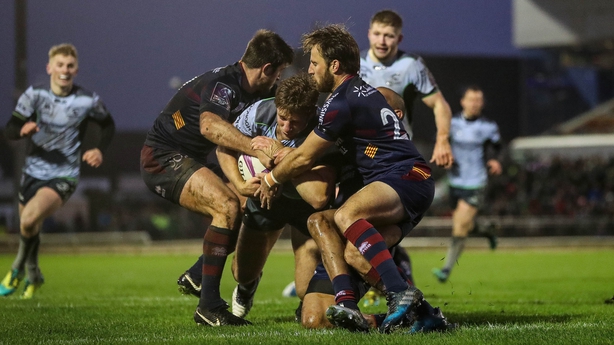 "We had autumn and winter didn't we? It was a real torrid affair. We'd the wind in the first half and just to be up 14 points I thought we hadn't done enough. But our second half was very, very good.

"We felt we needed to be three scores ahead. We weren't. We didn't dwell on that thankfully. The second half was more about trying to stretch them and backing our skills and system, which we did I thought.

"Our defence has been quality all year."

It was an especially dirty December afternoon that forced both sets of players to go to the well. Australian-born Friend admitted it was a shock to the system.

"It was unbelievable. My two boys were here and my wife and they said they'd never seen anything like it. We've got a few Aussie boys in the team too and it was like, 'really? Is this how we play?'

"I just said, 'well, you've got to be ready for everything!'. We've got a couple of wingers in there and it looks like they have hypothermia. We've got to be good enough to play in all types of conditions.

"Given that this is home for us, we were probably more suited to it than the French."

Connacht go to France for the return fixture next week before getting into festive provincial derbies against Leinster, Ulster and Munster.

Friend has taken a lot of heart form their recent form and believes the squad is really starting to take shape.

"We're getting through the numbers in the squad and trying to build that squad. I'm keen to have a crack at both competitions.

"Next week will be a telling factor for us. We'll head to Perpignan and be aiming for a win there. Then we'll come back and get ourselves ready for the inter-pro against Leinster.

"We're starting to build belief. Winning becomes a habit. That's four in a row for us now. It's nice to know we can win in different ways too."