Bath delivered arguably their most impressive display of a disappointing season so far, but they were undone after taking the lead through prop Henry Thomas' 22nd-minute try that James Wilson converted, with Wilson adding a late penalty to secure a losing bonus point.

Hooker Sean Cronin hauled Leinster level just before the interval, and with world player of the year Johnny Sexton converting both tries and Ross Byrne kicking a late penalty, Leinster went top of their group.

Bath, though, are drifting towards an early exit, having failed to win any of their first three European games and facing a testing return encounter against Leinster in Dublin next weekend.

Wet and windy conditions dictated an attritional affair, rather than an open, expansive game, and Leinster showcased all their experience to steer themselves home.

Bath were without injured fly-halves Freddie Burns and Rhys Priestland, so Wilson wore the number 10 shirt in a side captained by lock Charlie Ewels, while Francois Louw switched from flanker to number eight. 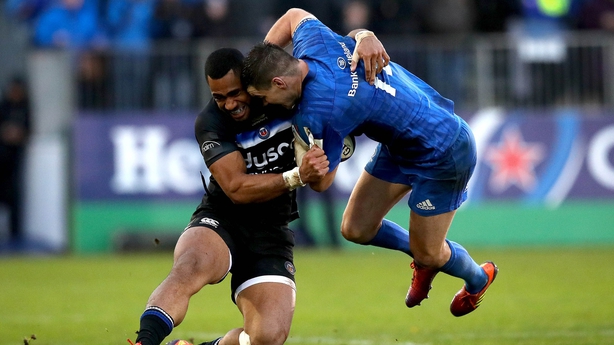 Leinster welcomed back a number of Ireland internationals, including Sexton, full-back Rob Kearney, centre Garry Ringrose and prop Tadhg Furlong as they looked to make further progress towards another appearance in the Champions Cup knockout phase.

And Bath retained their appetite to boss the close-quarter exchanges, with England flanker Sam Underhill prominent, and they deservedly went ahead midway through the half.

Leinster number eight Dan Leavy picked up from a scrum deep inside his own half, but Bath's Will Chudley tackled him, the home side turned possession over and then went for broke as Thomas crashed over to score.

Wilson added the conversion, yet it took Leinster just seven minutes to strike an equalising blow.

Bath's England wing Joe Cokanasiga failed to release possession after chasing a Leinster kick, and the visitors kicked to touch before prospering from flanker Rhys Ruddock's lineout take when Cronin applied a finishing touch by touching down. 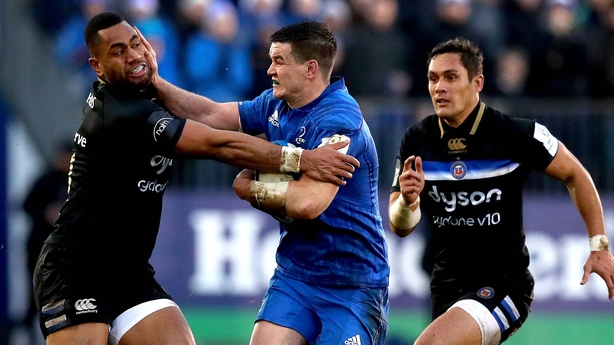 Sexton kicked the conversion to level things up, and the opening 40 minutes ended all-square after Bath went toe to toe with their opponents, inspired by Louw's towering defensive display.

But Leinster went ahead against the run of play nine minutes after half-time - and they owed it to Wilson's poor judgement.

Bath snaffled lineout possession just inside the Leinster half, and Wilson sensed an opportunity, yet his overly ambitious long pass was caught by Larmour, who sprinted 50 metres unopposed for a try that Sexton converted.

It was a hammer blow for Bath, and they needed to regroup quickly as Leinster moved in front for the first time.

Cokanasiga was then penalised for a high challenge on Leinster scrum-half Luke McGrath, but although referee Mathieu Raynal awarded only a penalty, it might yet attract closer scrutiny from the match citing commissioner.

And Byrne then gave Leinster breathing space by kicking a penalty seven minutes from time, leaving battling Bath down and out, while Cokanasiga limped off during the dying seconds.