The teams meet again in Belfast next Friday, and all the momentum is with Ulster, whose remaining Champions Cup fixtures also include a potentially-pivotal home clash against Racing next month.

Scarlets welcomed back Wales forwards Samson Lee and James Davies, who both missed the autumn Tests because of injuries, but full-back Leigh Halfpenny remained sidelined as he continued his recovery from concussion suffered against Australia four weeks ago.

Patchell and Cooney exchanged early penalties, while Ulster stretched the Scarlets defence through a strong run by Speight, and it proved a warning for what was to come just five minutes later.

Ulster attacked from a scrum inside their own half, with Addison easily rounding Scarlets and Wales centre Jonathan Davies, before possession found its way to Stockdale, who showed his class in blistering fashion. 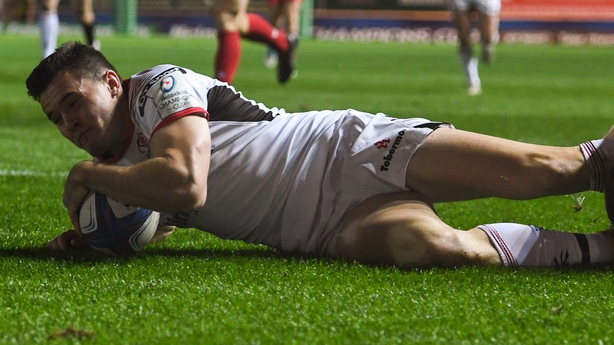 Stockdale - scorer of 12 tries in 14 Ireland appearances - brushed aside the challenges of wing Evans and scrum-half Gareth Davies to complete a sweeping 60-metre move in style, and although Cooney's conversion attempt drifted wide on a blustery night in west Wales, Ulster were off and running.

Scarlets lock Lewis Rawlins went off for assessment after being on the receiving end of an Ulster challenge that referee Alexandre Ruiz reviewed, but took no action other than to award the home side a penalty.

But the Scarlets forwards then moved up a gear, driving deep into Ulster's 22 and setting up an imposing attacking platform, from which Evans prospered to claim a close-range try that Patchell converted.

Scarlets' lead only lasted eight minutes, though, as a poor Patchell clearance kick allowed Ulster  the chance to run possession back and - after some patient build-up work - Speight crossed for his team's second try and secured a 13-10 interval advantage.

Ulster extended their lead 10 minutes after the restart when Cooney found Addison with a defence-splitting pass, and the centre finished effortlessly before Cooney's conversion opened up a commanding lead.

It was the cue for Scarlets to start putting width on their game, and Jonathan Davies was instrumental through his powerful carrying and support play before Best secured a penalty for his team and Ulster relieved the pressure.

But Evans set up the final quarter when he sprinted over for his second try, with Patchell's conversion cutting the gap to 20-17, yet Ulster responded immediately as Coetzee went over in the corner.

And Coetzee's touchdown proved the telling score, with the Scarlets left reeling despite a stoppage-time Davis try that Jones converted, leaving them looking down and out in Europe 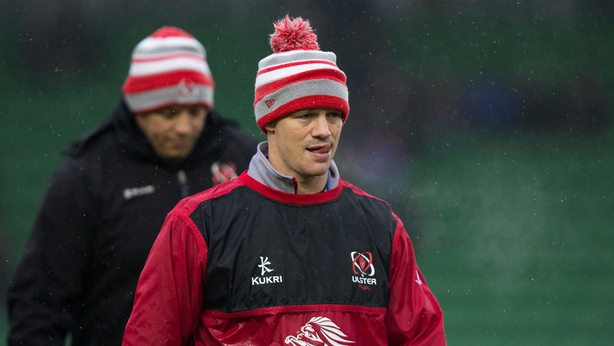 Ulster backs coach and former Scarlets and Wales scrum-half Dwayne Peel was delighted with his side's performance and said: "We had prepared well, and we realised it was a massive game for us.

"The Scarlets have a fantastic home record, so it was a huge challenge for us.

"But we couldn't have asked for more. We have got some good players in our squad, and they all stood up tonight.

"In this period in Europe, the job is sort of half done. We are delighted with the win, but we know there is going to be a backlash at our place next week.

"We are a work in progress. We are delighted with the win, and our aim is to get better week on week."