Peter O'Mahony says that Munster must rectify their propensity to struggle in the opening stages of their early kick-offs.

Sunday’s Champions Cup round three meeting with Castres will start at 1pm and the Ireland flanker admits that there have been problems getting into their rhythm when they are involved in the early matches.

Referring to their 36-22 win over Gloucester in the first round, O’Mahony told RTÉ Sport: "You’ve got to get going early.

"It’s something we probably didn’t do for the first game, Gloucester at home, Saturday, one o'clock.

"It took us a bit to get into the game so that’s something we are going to have to have a look at.

"But we know that the faithful supporters that we have will be packing into Thomond Park and giving us a huge background noise as they always do." 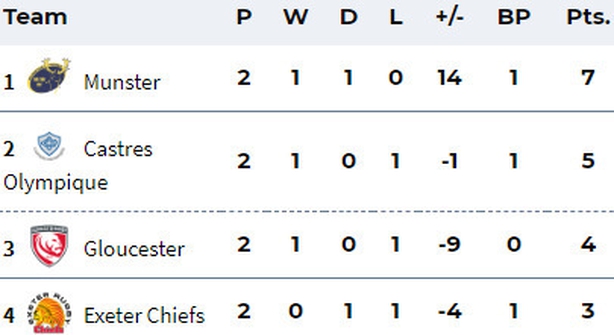 Munster are two points clear of second-place Castres, courtesy of the win over the Cherry and Whites and a draw away to Exeter.

Johann van Graan’s men come into the fixture on the back of a big Pro14 win over a lacklustre Edinburgh side, while the Top 14 outfit lost at home to Agen at the weekend.

O’Mahony is expecting a reaction from the visitors.

"They lost to Agen at the weekend at home so they’ll be hurting after that," he said.

"We know how proud they are and how much it means to them to win at home so they’ll be coming here looking to right that and put in a big performance.

"You see the way they really pressurise teams in the Top 14. They’ve a big kicking game, they force teams to concede lots of penalties.

"They have a very impressive maul, particularly potent from around 20 metres in so discipline is going to be a huge part of the week.

"We’re one and two in the group and for us, being at home first, it’s kind of season-defining.

Follow Munster v Castres via our liveblog on RTÉ.ie/sport and the News Now app or listen to live commentary with Michael Corcoran and Donal Lenihan on a 2fm Game On special this Sunday (kick-off 1pm)