From a sweeping All Blacks epic to a try-fest in Moroccan Blue - Ireland wrapped up the autumn with an entertaining defeat of a game USA at the Aviva Stadium.

It was a change of strip and a change of personnel for the hosts in their final Test of the year, but eight tries steamrolled the Eagles who had made life awkward in the first period.

Man of the match Andrew Conway bagged a hat-trick, with Jack Conan, Tadhg Beirne, Stuart McCloskey, Quinn Roux and John Ryan all getting in on the act

The visitors had their moments, Joe Taufete’e’s effort and a penalty try giving Ireland food for thought in the first 40. But Joe Schmidt’s men cut loose in the second half to keep the good vibes going and the competition for places intense.

After last week's epic blockbuster, it was time for the supporting cast to take to the stage.

Only Garry Ringrose survived from the starting 15 who faced down New Zealand, with John Cooney making his first Ireland start at scrum-half and the uncapped Sammy Arnold on the bench.

The Eagles were infused with an Irish presence of their own.

Flanker John Quill – a native of Youghal who played on the same Dolphin team as Niall Scannell and Darren Sweetnam - started as did prop Paul Mullen, born and raised on Inis Mór. He played for the Ireland Under-19s with Conway and Jordi Murphy.

On the bench was Greystones-born hooker Dylan Fawsett, who moved to the States four years ago and was in the same Blackrock College team as Murphy and Conway. They won the Leinster Schools Senior Cup together in 2009.

It was a sort of homecoming. 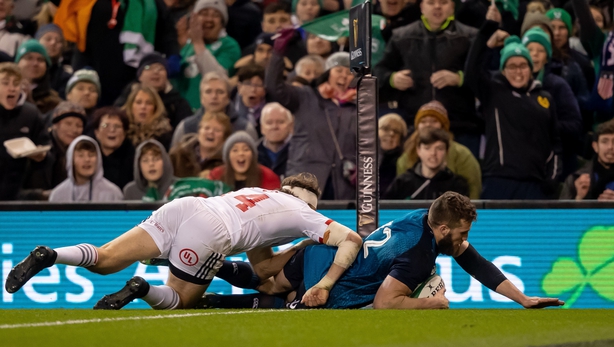 USA had won nine out nine Tests matches coming into this; form that lifted them to an all-time high world ranking of 13th. They showed why they’ve proven to be handful, even after making a nightmare start.

Rhys Ruddock, having been fed by Andrew Conway on the halfway line, skated in to USA territory with a terrific break, popping it back to the marauding Conway who galloped over for a try Joey Carbery converted. Three minutes gone, 7-0 to Ireland.

But the Eagles responded well.  Powered by 246lbs centre Paul Lasike, once of NFL giants the Chicago Bears, they won an eighth-minute penalty eight off an effective scrum, Will Magie pulling a straightforward kick horribly wide.

Four minutes later, they took their chance, working a lineout to Worcester Warriors hooker Taufete’e on the left wing. He barreled through two Irish challenges before dotting down for his 14th try in 18 games. This time Magie nailed the extras.

That seemed to jolt the hosts into life. Iain Henderson stole a lineout, Ringrose broke the line and Ireland poured forward. Patience is a virtue and it paid off for after a series of phases before Addison produced a nonchalant backhanded pass that allowed Conway to dive over for his second try in the 17th minute. Carbery slotted a fine conversion into the teeth of a decent wind.

To their credit, America kept coming. On 23 minutes they overwhelmed Ireland with a rolling maul and, after Iain Henderson illegally stopped it, they were award a penalty try and the Ulster lock was sent to the bin.

Carbery struck another good penalty three minutes later to nudge 14-man Ireland back in front and it was open fare. Six minutes before the break, another Irish try.

Arnold came on for his debut at the break, replacing the excellent Will Addison who’d looked supremely confident at full-back but departed for a HIA.

There were worrying scenes three minutes into the second half when Taufete’e lay motionless on the turf after an unfortunate collision with Henderson’s leg, requiring oxygen and several minutes of treatment before leaving the field on a stretcher. Fawsitt came on in his place. 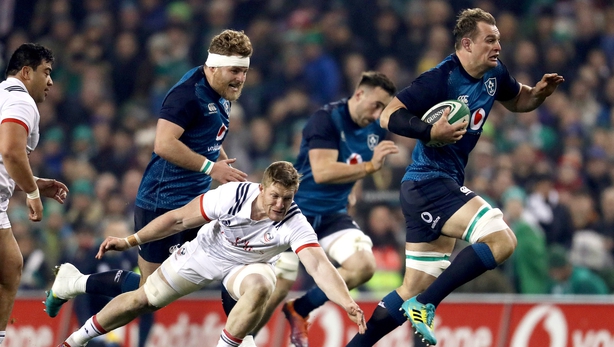 Having put so much in to the first 40 it was inevitable the visitors would fade, and they did so under waves of home pressure.

John Ryan, on for the injured Finlay Bealham, instantly flexed his muscles at scrum time and America eventually cracked when Beirne darted over from close range, the grounding being confirmed after Kiwi referee Ben O’Keeffe went to the TMO.

Before the hour, a piece of magic. Conan charged down a Shaun Davies kick to spark an Irish counter, the US were sucked in and Byrne switched play with an inch-perfect crossfield kick into the arms of McCloskey who finished in the corner.

The intensity remained as USA legs tired. Conan and then Beirne made more good yards off a lineout and Roux reaped the rewards, bustling over for his sixth international try. A brilliant Conway chip and chase then led to Luke McGrath trotting under the posts but it was chalked off for an earlier forward pass from Cian Healy.

No matter, Conway completed his hat-trick four minutes from time, haring onto Ringrose’s offload after the centre twisted the guts of his opponents with delicate, dancing feet.

And there was still time for Ryan to get on the scoresheet after another relentless home attack. Another game at the Aviva, another Irish win.

Next stop the Six Nations.