Scott Penny touched down on his Leinster debut as they hammered Ospreys 52-7 in a one-sided Guinness PRO14 encounter at the RDS.

19-year-old flanker Penny, another of the Irish province's impressive academy players, scored from a 31st-minute lineout maul with Conor O'Brien and Nick McCarthy also crossing to establish a 24-0 half-time lead.

Both team selections were severely hampered by the November internationals, but Leinster, who absorbed the early pressure, made light of it and Fardy ghosted through a gap to set up centre O'Brien for an 11th-minute opener.

Three lost lineouts saw Scott Otten's throw under increasing pressure from Fardy and company, and a high tackle from Olly Cracknell had Leinster hunting for a second try. Frawley and Nick McCarthy were both stopped short before the former landed a 23rd minute penalty. 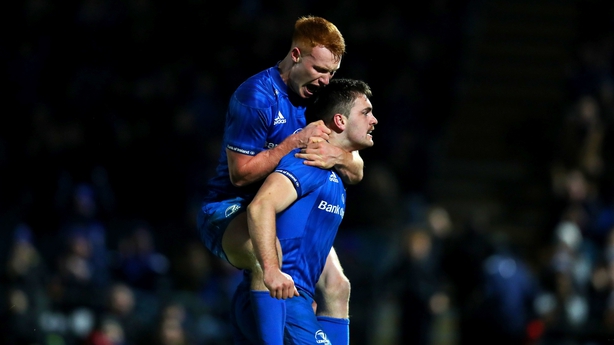 Further indiscipline from Ospreys invited Leinster forward and, from a second maul attempt, Ireland Under-19 international Penny piled over near the left corner. The visitors thought they had scored a well-worked try in response, but James Hook's score was ruled out for obstruction from debutant centre Johnny Kotze in the build-up.

Fardy was to the fore in a bout of powerful carrying from the home forwards, which led to scrum half McCarthy stretching over for his 37th-minute converted score.

The Conference B leaders had their bonus point wrapped up four minutes into the second half, James Lowe making the initial incision before the forwards took over and Fardy managed to touch the base against the base of the right hand post.

A Frawley and Noel Reid-inspired break led to Fardy carrying up close before Ed Byrne burrowed over to make it 38-0. Adam Byrne gobbled up a Reid kick and fed Deegan, on his inside, to finish off a 63rd minute try from 40 metres out, and Keelan Giles' try-saving heroics denied Hugo Keenan a breathless score from deep.

There was still time for Ed Byrne to provide the assist for his twin brother Bryan's try, with eight minutes remaining. Frawley was unerring with the boot putting the outcome well beyond doubt, and the eighth try of the night saw Ospreys salvage some pride, Davies' slick pass sending winger Hanno Dirksen past two defenders to nip over by the posts.