New Zealand coach Steve Hansen retained just four players from the starting team that lost to Ireland last week when he named his side to face Italy in Rome this weekend on Thursday.

Skipper Kieran Read, openside flanker Ardie Savea, full-back Damian McKenzie and out-half Beauden Barrett are the only players who started the 16-9 loss to the Irish who will take to the field at kick-off at the Stadio Olimpico on Saturday.

While the world champions would have been expected to make a raft of changes even if they had not lost in Dublin, few would have predicted McKenzie to be one of those retained in the side given his displays in the number 15 shirt on tour.

Richie Mo'unga might also have thought he was in with a chance of start, but instead Hansen has stuck with Beauden Barrett in the playmaker role. 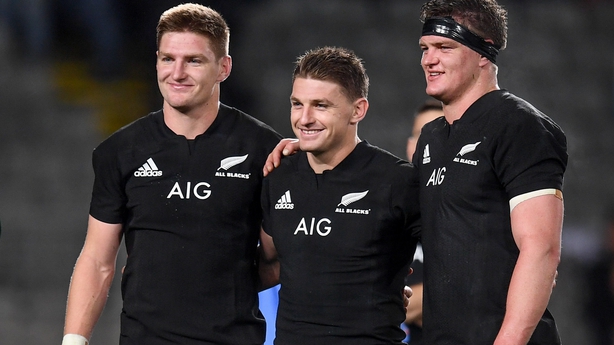 All three Barrett brothers start, with Jordi picked on the right wing in place of Ben Smith, and Scott brought into the second row to allow Brodie Retallick a bit of a breather on the bench.

The first two rows of the pack are changed completely, with Vaea Fifita coming onto the back row alongside Read and Savea, and Dalton Papalii set to win his second cap as the replacement loose forward.

Scrumhalf Te Toiroa Tahuriorangi is likely to play his third test with TJ Perenara starting and Aaron Smith rested, while Dane Coles replaces Codie Taylor at hooker for only his second start of the year.

"The Italians will bring plenty of line speed, with a wide defensive spread, and again allows us to experience playing this type of team," Hansen said.

"They're big men who play with a lot of passion and pride.

"Our goal will be to create quality set-piece ball and lightning quick ruck ball, coupled with a real accuracy in our decision-making so we can use our skillsets accordingly."