A spirited Irish performance was not enough to thwart USA Eagles who outscored their hosts three tries to two in a 19-10 victory at Energia Park.

Adam Griggs’ side finished both halves with tries, but the Americans had more control over proceedings, dominating possession and territory in the November international.

After a bright attacking start from Ireland, it was the USA who struck first. The rolling maul had Ireland backpedaling, with Kimber Rozier racing between the covering defenders. She then duly converted her own score.

KB Broughton then extended their advantage shortly after the half-hour mark. USA were camped on the Irish line, with a big tackle from winger Eimear Considine halting their momentum, but the ball was spread wide and the full-back darted between the space.

Referee Rebecca Mahony had to consult with suggestions of a double movement, but the score stood.

Griggs would have been pleased with the response. After soaking up so much pressure, scrum-half Ailsa Hughes was quickly onto a loose American pass and when the ball was fed to Laura Sheehan, the winger sprinted along the line to mark her debut in style to leave the half-time scoreboard 12-5 in favour of the Eagles. 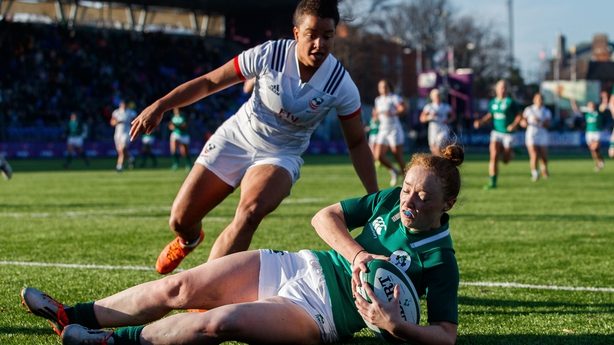 The second half began in a similar pattern to the first, with the side ranked fourth in the world dominating possession and territory. However they struggled to puncture an Irish defence that creaked, but didn’t crack, with Ciara Griffin again a key figure at the breakdown as she engineered a number of crucial turnovers.

On the hour mark however the dominance was rewarded when Meya Bizer went over. It stemmed from a break down the middle and Ireland’s scramble defence was caught short on the blindside and Bizer dotted down in the corner, with the difficult touchline conversion attempt sailing between the posts. 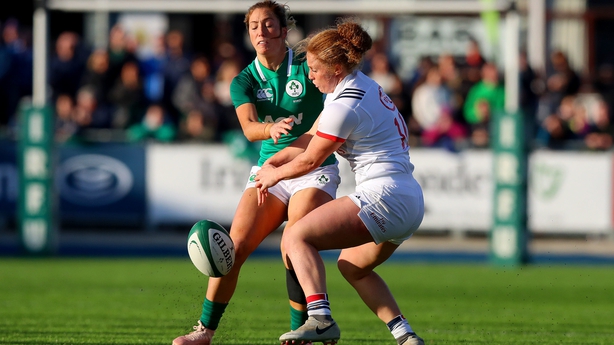 The 2017 World Cup semi-finalists were in truth a class above with Irish attacks were few and far between for the majority of the second half.

They did however finish with an attacking flurry in the final five minutes and gave themselves something to build on ahead of next weekend’s daunting visit to Twickenham.

Beibhinn Parsons became the youngest Irish international when the 16-year-old was introduced off the bench and her first involvement was to slice through the defence, but was held up over the line.

Ireland remained patient. A quick tap-penalty by replacement scrum-half Nicole Cronin was swept out to Considine and, in her first Test outing in more than a year, she cut back inside to cross the line and put a better complexion on the scoreboard.