Canada remain on course for a ninth successive Rugby World Cup appearance after a 29-10 bonus-point victory over Germany in their repechage qualifier at the Pierre-Delort Stadium on Saturday.

The North American side need just a point from their final qualifier against Hong Kong on Friday to seal a berth at the World Cup in Japan next year and keep up their 100 percent appearance record since the global showpiece was first played in 1987.

Canada have 10 points from their two games at the top of the pool, while second-placed Hong Kong have five, meaning even a loss without conceding a bonus-point would see the Canadians qualify.

Germany and Kenya, who also meet next Friday, have been eliminated.

"It was incredibly difficult, we knew they would come out strong and be a physical side. To come through was awesome," Canada captain Phil Mack said in the post-match presentation.

"This team has been through so much, we have had a lot of losses in a row but we have taken learnings from those for these kinds of situations. 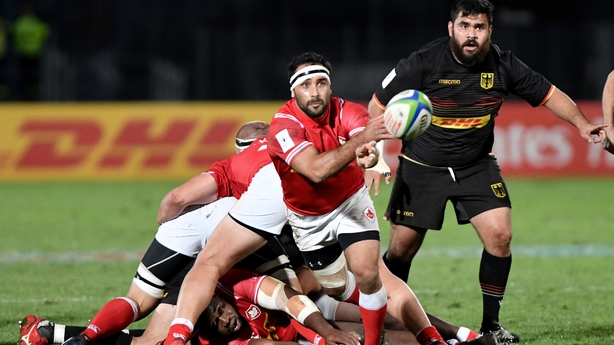 "We have to respect Hong Kong and it will be really tough, but we will enjoy this win first."

Canada pulled away from Germany in the second period after holding a narrow 10-7 lead at halftime.

Tries from Waikato Chiefs number eight Tyler Ardron, flyhalf Gordon McRorie and flanker Lucas Rumball in the second period secured the win for the Canadians, who are ranked number 21 in the world.

The Asian side trailed 12-7 at halftime, but led by two tries from number eight Thomas Lamboley they rallied for an emphatic victory.

The repechage tournament winner will be placed in Pool B at the World Cup in Japan along with defending champions New Zealand, South Africa, Italy and Namibia.