Kieran Read believes that New Zealand will have to hit new heights in order to beat Ireland in Dublin.

All Blacks boss Steve Hansen has insisted Saturday's winner will earn the right to call themselves the best in the world, despite the fact the Kiwis will retain the number-one spot in the global rankings whatever the result.

Number eight Read has now racked up 100 Test wins in his 116 caps, the fourth All Black to hit a century of international victories.

But the 33-year-old has demanded another step up from the world's top team this weekend.

"We're going to need our best performance of the season, I think, the way the Irish have been playing," said captain Read.

"So we've prepared as well as we can physically, the guys have prepared really well and are just looking forward to it.

"The Irish are undoubtedly the best side up here (in the northern hemisphere) at the moment, so to challenge ourselves in their conditions is an exciting one for us.

"We're in a good space mentally so it's about being ready physically to get the job done."

The All Blacks have been at pains to explain the labours of their northern hemisphere tour that ends their season, whereas their European opponents are only just embarking on their own campaign. 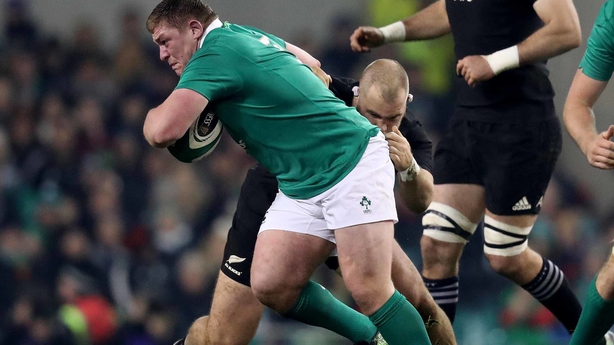 Read believes New Zealand must not panic if Ireland dominate possession, hailing boss Joe Schmidt's men as the best around at hogging the ball.

"They are a very structured side, and in terms of how they hold onto the ball they are the best probably in terms of tier-one nations in the world," said Read.

"And also their ability to defend very strongly as well, so they are a good side.

"We've got to find our opportunities (to try to win the ball), we can't be too hungry to look for those opportunities, discipline's going to be crucial. And when we get those chances to get the ball back we do that."

Ireland boss Schmidt has predicted a "spiky" encounter on Saturday, as the fallout from the All Blacks' punishing 21-9 victory in Dublin two years ago continues.

Schmidt and his team were frustrated Malakai Fekitoa got away with just a yellow card for a high shot on Simon Zebo, and that Sam Cane was merely penalised for a head-high hit on Robbie Henshaw.

Asked for his views on Schmidt's comments, Read said: "Physicality and intensity wins Test matches, so we're going to have to be right up at that level.

"I'm sure there's going to be a lot of emotion, a lot of heat out there, which is what you want to see in the big games, when two good teams come up against each other.

"I think it will be an awesome Test match, so that's what I'm looking forward to."