Just as Manchester City have people in this part of the world questioning state sponsorship of sports teams, the All Blacks are actively seeking out the support of their own government.

"You can go anywhere in the world and people may not know New Zealand, but they've heard of the All Blacks, and I think it's an opportunity to take New Zealand to the rest of the world by using that brand. That's why I mentioned they should be one of our sponsors," said head coach Steve Hansen back in September.

Yet they are struggling to retain their best players as cash-rich French, Japanese and English clubs try and cherry-pick talent from the world's most dominant rugby team.

Former Ulster player Charles Piutau and Steven Luatua are two to turn their back on the black jersey while in their prime - a development considered far more troubling than the likes of Doug Howlett or Dan Carter seeking a final payday after long and storied Test careers drew to a close.

Not that Kiwi rugby players earn a pittance - they are very well recompensed financially and also idolised in a country daft about rugby.

Hooker Dane Coles' (below) supposed reluctance to fork out $50 per month for the Rugby Channel says more about the team's self-confidence and insularity than his pay packet. 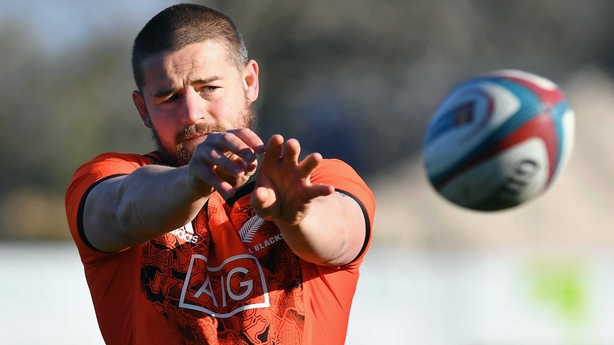 "In New Zealand you have to pay for the rugby channel, that's where they play all the Six Nations and I'm not paying for that," told RTÉ Sport this week.

"They've actually started to play some of the games on Sky Sports and I actually watched a few just while the kids are demanding breakfast, I'd flick it on and have a look.

"I think it's created a bit more interest in it now."

A bit more interest, but Coles and Ryan Crotty were both honest enough to admit Ireland's Grand Slam showdown with England back in March was not worth the effort of getting out of bed early.

Ireland have earned the right to be considered the second best team in the world, but in the eyes of an All Black, there is a lot of daylight between themselves and the chasing pack.

"Some moan about the Haka, but a team that play two anthems before every home Test would want to be careful complaining about a traditional war dance"

Most Kiwi journalists and fans would freely admit that history, sporting and colonial, along with the long-standing rivalry, made last week's match at Twickenham the highlight of this European tour, whatever the rankings might say.

No need to take offence. The back-to-back world champions' superiority complex extends to the wider rugby union world and many would argue that their lofty position has brought them advantages not available to other teams.

Some moan about the Haka, but a team that play two anthems before every home Test would want to be careful complaining about a traditional war dance. Besides, it is a spectacle enjoyed by most fans and - when dealt with correctly (as in Chicago two years ago) - it can be used against them.

The two areas where the chasing pack may have a more valid gripe with the All Blacks revolve around eligibility and discipline.

The joke surrounding World Cup winning captain and helicopter pilot Richie McCaw was that he was born offside, but there are countless examples of the All Blacks seemingly benefiting from favourable refereeing decisions.

Just last weekend Sam Underhill was denied a potentially match-winning try for England after the TMO took endless looks at Courtney Lawes' block-down of TJ Peranara in the build-up. The offside ruling was correct but flew in the face of the new guidelines surrounding the use of television match officials. They are supposed to be reserved for obvious infringements - this was not an obvious infringement.

Our own Clare McNamara made headlines in New Zealand with her persistent questioning of Hansen's team's discipline after they visited the most physical of retributions upon Ireland a fortnight after the Soldiers Field win.

Steve Hansen gives his post-match verdict to @rterugby: "Do you want me tell you we're a dirty side?" https://t.co/pb0YIIqZd7

"Do you want me tell you we're a dirty side or something? Is that what you're saying?" asked the coach when McNamara pushed him on a high hit on Simon Zebo and tackles that left CJ Stander and Robbie Henshaw concussed.

Brian Cody would appreciate the savage intensity with which the All Blacks play the game but some of their opponents would like to feel they are all policed the same.

There is undoubtedly a mystique built around the team in black, a mystique that helps them attract the finest playing talent from surrounding, rugby-mad nations - be they first generation or second.

Waisake Naholo and Seta Tamanivalu (Fiji), Ofa Tu’ungafasi (Tonga) and Nepo Laulala (Samoa) are current All Blacks who could be playing for the countries of their heritage. But the lure of the black jersey is strong.

The lure in reverse is not so strong and the biggest team in world rugby have played only 17 Tests in their history against the three Pacific Island states that have contributed so much to their talent pool.

Rugby's eligibility rules are fluid, but the inability of New Zealanders to recognise the debt they owe others becomes apparent in their criticism of others who accept outside talent.

"If this strategy persists then the chances are high that the next generation of Ireland's midfield will be watching the test in Dublin this weekend in New Zealand, cheering for the All Blacks and desperately hoping one day to play for them," writes Paul, perhaps giving the diabolical IRFU more/less credit than they are due.

New Zealand is a country of comparable size to Ireland who have come to dominate the global rugby scene like few international teams in any sport.

This is partly down to a focus placed on the sport shared by few others. Living in Queenstown during the 2007 World Cup, I learned the hard way that you do not joke about the All Blacks losing. An Irish defeat was fair game, but the ABs losing was like a death in the family.

They clean the sheds, they strive to not be dickh**ds and any All Black you meet is always as polite and obliging as possible, but they will remove your spleen to win a game.

Venerating them and treating them like the paragons of all things rugby will only guarantee you lose. Besides, it is not all necessarily true.