Brian O'Driscoll and Tana Umaga insist any lingering scars from the 2005 Lions tour have finally healed.

O'Driscoll admitted he still carries regrets over the fallout from Umaga and Keven Mealamu's off the ball tackle that left him with a dislocated shoulder and ended his tour of New Zealand just 41 seconds into the first Test in 2005.

Some 13 years after the flashpoint, the former Ireland and New Zealand captains sat down together in Dublin - to draw a line under the incident, and the aftershocks, once and for all.

Even on last year's Lions tour - the first back in New Zealand since O'Driscoll's injury cut short his captaincy in 2005 - Umaga was not inclined to address the issue.

But finally the pair have come together, revealing that over a sequence of meetings and with no little humour, the hatchet has been buried.

"We parked it a long time ago," said O'Driscoll, meeting up with Umaga ahead of Ireland facing New Zealand in Dublin on Saturday.

"It was one of those things. Was it unfortunate? Yeah. Should you have dealt with it slightly differently? Yeah.
"You've got to move on. You can't bring those sorts of things through life.

"Listen, we're able to have a laugh and take the p*** about it now, properly.

"Sometimes you don't get an opportunity to meet up with people in a controlled environment. We see each other at events here and there and have a quick word.

"Actually, to have a get together and chew the fat and properly get to talk and not feel scarred by it is refreshing and, I hope, it's dead after this." 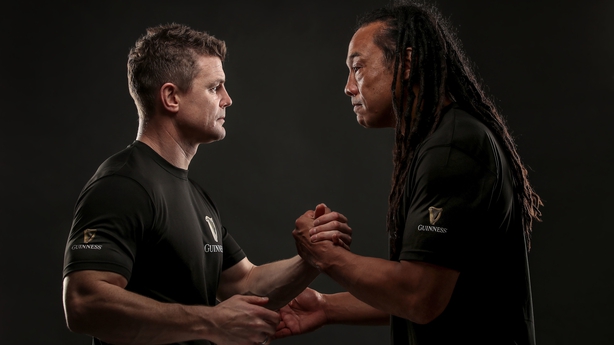 New Zealand stars Umaga and Mealamu upended O'Driscoll at a ruck in the first Lions Test in Christchurch in 2005. O'Driscoll dislocated his shoulder and his tour was over.

Neither All Black faced punishment at the time or after the match, sending the Lions into a frenzy. Coach Clive Woodward and spin doctor Alastair Campbell went on the offensive, but to no avail.

O'Driscoll was upset Umaga had not checked on his well-being on the night. Umaga later branded the Ireland and Lions skipper a "sook", Kiwi slang for cry-baby, in his autobiography.

Few rugby feuds have lingered longer, or seemingly with such depth of feeling.

When the Lions faced Auckland on last year's New Zealand tour, Umaga suggested it was time to move on. Centre Sonny Bill Williams even interrupted a press conference question directed at the now-Auckland coach Umaga as interest in the incident refused to dissipate.

"We had a great dinner; that was the key thing for us, to have time together," said Umaga, as the pair spoke together representing Guinness.

"You pass each other fleetingly at matches and engagements. To really sit down and chew the fat around that was great.

"That's just part of this game. We can't change the past. Yet, it is something whenever I do something that I get asked about.

"It is well settled between us as Brian has said. Hopefully this will really put it behind people and we will make peace with it now."

O'Driscoll conceded this issue should have been long since confronted, but revealed his relief at now fostering a much-improved relationship with Umaga.

"It dragged on probably longer than it should have because, maybe, it wasn't nipped in the bud," said O'Driscoll.

"There are some things you wish you could go back and change. From my point of view, I am sure Tana too, there are aspects there too I wish I could have done differently too.

"We met up during the summer at a golf event and it was like being back at school with your mates.

"As ex-players when you park the international stuff you are able to get on all the more because that adversarial aspect is not there any more.

"The smart thing would have been not to have waited 13 years to do this; it might have worked out a little better."