Scrum-half Murray has not played since damaging his neck on Ireland's summer tour to Australia in June, and was omitted from the 42-man autumn squad.

Head coach Joe Schmidt revealed Murray would be allowed to make the call himself as to whether he was ready to take on the All Blacks in Dublin, and Ireland have now confirmed the 29-year-old will not feature this autumn.

Potent centre Robbie Henshaw will also miss Saturday's crunch clash with a hamstring injury in a double blow to the hosts, but talisman fly-half Sexton insisted Murray was wise not to take any risks.

"I obviously stayed in touch with Conor a lot over the injury to see how he has been getting on and all the time he's been improving, but I suppose he's just trying to make sure he can get it right from now and it not be an issue going forward," said Sexton.

"It's probably a smart thing. It's a big ask. If you're out for a few weeks and you're asked to play the All Blacks, that's tough enough. But if you're out for the period of time he has been out for, it would be a big step in.

"Hopefully, we'll see him back soon, I'm not sure how soon but obviously he's a quality player, we'd hope to have him back, whether Munster or Ireland, whenever he can." 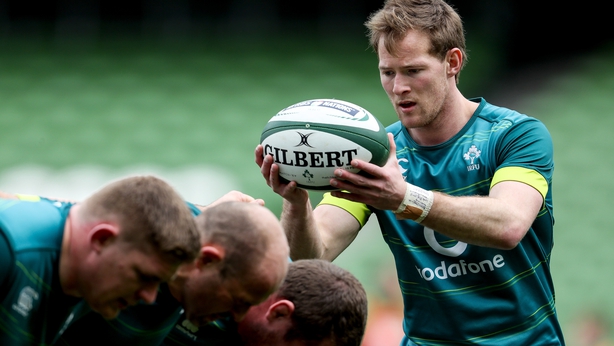 Kieran Marmion and Luke McGrath should act as Ireland's scrum-halves again in Murray's absence, while Henshaw's hamstring injury will have boss Schmidt hoping to pair Bundee Aki and the fit-again Garry Ringrose in midfield.

"Conor Murray is accelerating through his recovery but will not join the squad during the Guinness Series window," the Irish Rugby Football Union (IRFU) confirmed in a statement.

"Robbie Henshaw's hamstring issue will rule him out of the remainder of the series."

Sexton helped Ireland topple New Zealand for the first time in their history in the 40-29 victory in Chicago in 2016, then steered the Lions to the 2017 drawn Test series.

The 33-year-old backed Ireland to cope without the injured Henshaw, and for scrum-halves Marmion and McGrath to deliver in Murray's absence.

"Robbie Henshaw has been a big part of the team over the last number of years; I'm sure he'll bounce back quickly but he's obviously a loss," said Sexton.

"He'd be a loss for a lot of the teams in the world and he'll be a loss for us this week. But the guys that are available will do a great job.

"Conor (Murray) is a world-class player and the guys behind him are chasing, but I think they did well at the weekend.

"They'll be better for that experience as well. I think the more time you spend in the environment here the more comfortable you get and the better you get.

"I'm sure those guys will go a step ahead again this week."