South Africa scored a try in stoppage time to edge to a dramatic 29-26 win over France at the Stade de France on Saturday, with hooker Bongi Mbonambi surging over to secure an unlikely victory.

The Springboks stole possession with less a minute left and went almost the entire length of the pitch, with the help of four penalties that they kicked into touch to gain ground, before driving over for a smash and grab success.

Mbonambi peeled off the side of the driving maul to dive over the line in the 85th minute and hand the South Africans success in the second game of their four-test European tour.

They had been 23-9 down early in the second half but turned it around, marking a change of fortune after narrowly losing their last two test outings to New Zealand last month and England last weekend.

"It was an incredible finish and the boys showed fight and perseverance. It was tough but we'll take the win. We picked it up in the second half," said winning captain Siya Kolisi.

France and South Africa scored two tries apiece with the boot of visiting flyhalf Handre Pollard, who kicked five penalties and two conversions for a haul of 19 points, proving the difference.

Baptiste Serin slotted over two penalties in the opening 11 minutes to give France an early 6-0 lead but by the half-hour, South Africa were 9-6 ahead as Pollard slotted over three penalties.

Home flyhalf Camille Lopez then put over a drop goal to level the scores in the 34th minute.

A sparkling line break by winger Teddy Thomas then set up the first try for France.

Thomas broke upfield and, although eventually tackled, forced a line-out from where the French maul pushed towards the goal line before captain Guilhem Guirado broke and made a short dart to the try line to give France a 16-9 halftime lead. 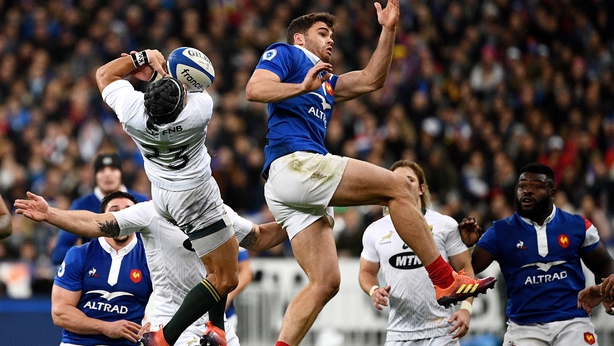 Mathieu Bastareaud scored two minutes after the resumption as Lopez kicked a high ball almost at the South African goal posts. With the defence unable to field it, the imposing centre picked up the loose ball to crash over and extend the lead.

Straight from the kick off, giant French lock Sebastien Vahaamahina fumbled the ball, spilling it back towards his own line where it was snatched up by Sbu Nkosi.

The Springbok winger sped over for his second try in as many weeks after also scoring in last weekend's loss at Twickenham.

South Africa reduced the deficit to a single point with two more penalties from Pollard as France were again guilty of unnecessary infringements.

Yet a late lunge from scrumhalf Faf de Klerk, which knocked Lopez to the ground, allowed Serin a chance to make it 26-22 with his third penalty of the night.

France looked to be holding out before substitute loose forward Francois Louw stole possession near his own posts to set up a Springbok surge that turned the game on its head. (Reporting by Mark Gleeson; editing by Tony Lawrence and Ian Chadband) 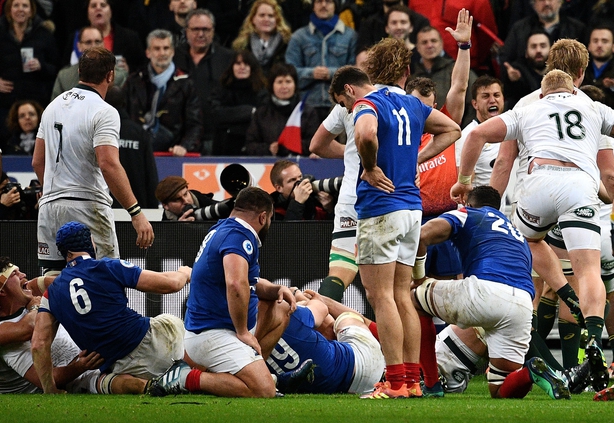