Ireland set themselves up for a shot at world champions New Zealand with a dogged win over Argentina in Dublin.

The victory, a record tenth home success in a row, came at a cost, however.

Flanker Sean O'Brien, according to Joe Schmidt, has broken his right arm and looks set for another long spell on the sidelines, while Robbie Henshaw pulled up in the warm-up with a tight hamstring and was replaced by Ulster's Will Addison, winning his second cap.

The sides swapped the lead for most of the game but tries from Kieran Marmion, Bundee Aki and Luke McGrath, as well as 13 points from the boot of Johnny Sexton were enough to ensure the Pumas' losing streak in Dublin was extended to nine games.

Schmidt will have plenty of work-ons ahead of the visit of Steve Hansen's side, who earlier recorded a 16-15 win over England at Twickenham.

Even taking the late withdrawal of Henshaw into account, the normal standards associated with the Six Nations champions, were not met.

Jordan Larmour, who was selected ahead of the injured Rob Kearney at full-back, got isolated out wide and Nicolas Sanchez was able to land a long-range penalty after just three minutes.

The hosts responded with Marmion sniping over after a strong scrum but Sexton stubbed the conversion.

Ireland then made a mess of the restart and Sanchez fired over another penalty.

The out-half was quick to test the new centre partnership and combined with Matias Orlando and Jeronimo de la Fuente to slice open the Irish defence, a move than ended with winger Bautista Delguy sauntering over in the corner after 17 minutes.

Schmidt's charges were still not getting into any discernible rhythm but did regain the lead after more close-range pressure allowed Aki to smash his way over for his third international try.

That advantage lasted just eight minutes when James Ryan, man of the match, infringed, allowing Sanchez, Argentina's top-points scorer, to kick the visitors into a 14-12 lead with five minutes left in the half.

Then disaster struck for O'Brien.

The talismanic flanker, who missed out on Leinster and Ireland's glory runs last year due to shoulder and hip issues, was forced off with a serious looking injury, suspected to be a broken arm.

The Pumas, as hungry and aggressive ever in the breakdown, infringed again on the halfway mark and Sexton, winning his 77th cap, landed a penalty to give Ireland a 15-14 lead at the break.

The pendulum continued to swing at the start of the half and Sanchez knocked over another penalty when Ireland conceded the fifth of a total of just six penalties.

The hosts seemed desperate to force their will on the game but the passes were slightly behind and the timings just off.

The South Americans were winning the aerial battle as well and from that were able to find gaps in the Irish line.

Marmion, deputising for the injured Conor Murray, then departed as Sexton wrenched back the lead with his second penalty in the 58thminute, 18-17.

Dan Leavy, who had replaced O'Brien, Aki and Stander began to hold the ball and build phases and with that Mario Ledesma's side began to tire.

O'Mahony nicked a lineout as the Lansdowne Road crowd found its voice and Luke McGrath stepped inside before diving over for a try which Sexton converted.

Aki, who carried strongly throughout, took a knock, as did Tadhg Furlong and Jacob Stockdale just before Sexton pushed the lead out to 28-17 with a penalty with four minutes to play.

Ireland held out for their 12th ever win over Argentina but have lots to figure out before next Saturday's clash. 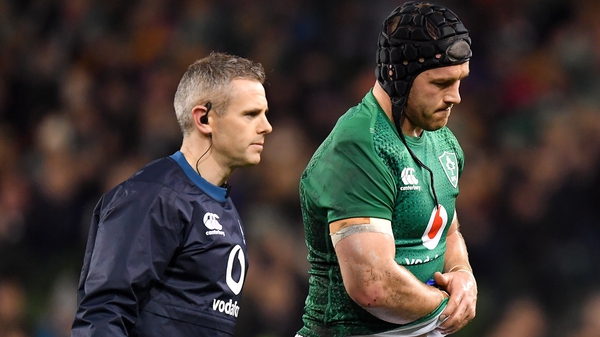