Brian O’Driscoll has withdrawn his original verdict on Owen Farrell’s controversial tackle at the end of England’s win over South Africa.

The out-half’s tackle on a rampaging Andre Esterhuizen was highlighted by the TMO but referee Angus Gardner, on touchjudge duty for tomorrow’s Ireland v Argentina game in Dublin, decided that there was no case for the Saracens man to answer and promptly blew the full-time whistle on a 12-11 England win.

Tweeting shortly after the game, O’Driscoll said: "Reckon the ref got that Farrell hit spot on! Not enough evidence that there was no attempt to wrap an arm. Collision was MASSIVE."

Should this have been a @Springboks penalty at the end of the game❓#ENGVRSA #FollowTheRose @EnglandRugby @Springboks pic.twitter.com/377FUxSYnQ

That sparked a massive debate with many leading ex-players speaking out with opinions divided on the hit.

However, the former Ireland skipper has had a re-think and now believes that Farrell was a lucky man.

"I backed the referee's call immediately after the game, and I've actually revised that thought," he told reporters at a Guinness event.

"I actually didn’t understand it, and as a pundit maybe it's a disgrace, but I actually thought if it's an attempted wrap with the non-tackling shoulder that would suffice.

"But it doesn't. There has to be a wrap with the tackling shoulder.

"So you can't hold one arm down. Now that action in itself is not easy.

"But I stand corrected there on the basis that it obviously is a penalty." 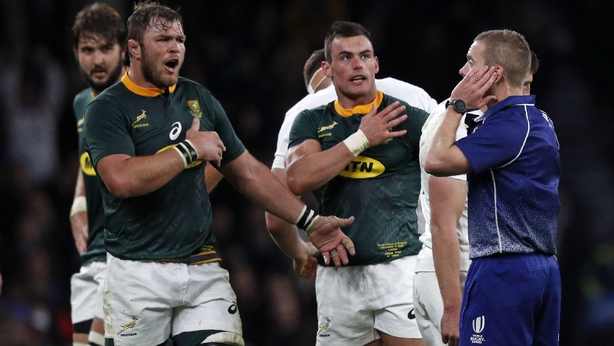 "If he was Johnny Sexton, then we'd be able to complain about him, but because he's Owen Farrell he's allowed to be hit late," said Jones, whose side face New Zealand in Twickenham tomorrow (3pm)

"He gets up and plays on. He'll be like that this week."

O'Driscoll believes that as long as fly-halves stand flat and attack the gainline, they will always run the risk of copping borderline, or even late tackles.

"But I think as well that Johnny, even more so than Owen Farrell, Johnny takes the ball to the line and encourages those shots, because they are marginal, a lot of them.

"So if he throws it half a second away from the contact and someone still follows through, it's a call for the referee to make.

"Sometimes he'll accept the one he throws right on the line, he gets right after he releases it, but that's fair game.

"But now we're talking about it so much, we're achieving exactly what Eddie was hoping for."

Follow Ireland v Argentina via our liveblog on RTÉ.ie/sport and the News Now app, watch live on RTÉ2 and the RTÉ Player or listen to live commentary on RTÉ Radio 1 this Saturday (kick-off 6.30pm).