Luke McGrath is wary of Argentina’s attacking threat ahead of Saturday’s November series clash at the Aviva Stadium.

Argentina will travel to Dublin full of confidence, following a Rugby Championship campaign in which they beat Australia and South Africa.

Indeed, were it not for defensive errors, it could have been an even better campaign for the Pumas, who lost two of their six games despite leading at half-time, most spectacularly in their final match against Australia on 6 October.

Head coach Mario Ledesma has focused on defence, stamina and concentration during their preparations in Buenos Aires, but scrum-half McGrath is more concerned about their new-found attacking flair.

"They’re a massive threat, they have a big pack who like to run the ball and a back three that can run off anywhere," he said.

"If we’re loose with the ball, they’ll kill us. They’re led well by (Nicolas) Sanchez at 10 and (Gonzalo) Bertranou, the new guy at 9 who has played really well as well.

"They’re a huge attacking threat and we’ve got to look after the ball.

"From our attacking point of view, we have to go through the phases and make them tired.

"Defensively Faz [Andy Farrell] has gone through us today, just talking about staying connected, everyone being on the same page and just shutting their threats down, but it’s a massive challenge for us this week." 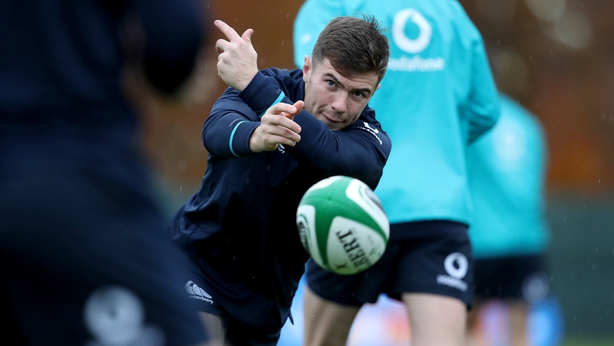 McGrath is hoping to see a blistering start from Ireland and pointed to the first half of last week’s victory over Italy in Chicago as an area in which they can improve.

"Going back to the Italy game, we were a bit slow and the first half was a bit slow, not the pace we wanted to play at," he said.

"We definitely played a bit better in the second half, played with a bit of pace and just moving on from that, we’re going to have to hit the ground running in this game," he added.

With Conor Murray set to miss this weekend’s clash, McGrath is in a battle with Kieran Marmion for the No 9 jersey, and he’s relishing the prospect of getting another chance to impress after a try-scoring performance in his first game for Ireland in almost a year.

"Conor will be a tough man to replace," McGrath said. "For me, last week was a great opportunity. I really enjoyed it myself.

"I hadn’t been in the shirt for a while and I was a bit nervous before but it was incredibly exciting and delighted to get the win in the end."