Owen Farrell struck a late penalty to propel England to a controversial 12-11 victory over South Africa in a gripping start to their autumn series at Twickenham.

Farrell landed a difficult kick in the 73rd minute that ultimately decided the Quilter International, but the Saracens fly-half was then under the spotlight as controversey reigned in injury time.

He appeared to lead with the shoulder in tackling Andre Esterhuizen, an offence that under the current crackdown on dangerous tackles could have resulted in a red card being issued by referee Angus Gardner.

The Australian official decided Farrell's tackle was legal, however, to deny South Africa a kickable penalty. 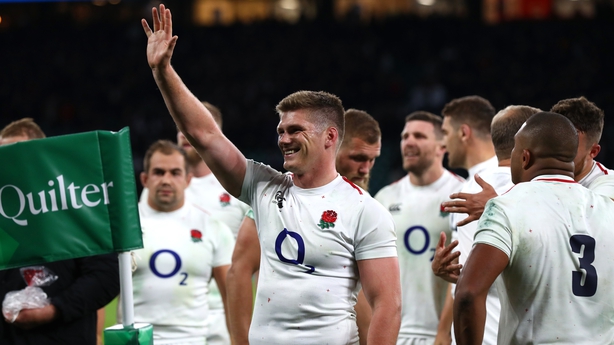 England were under siege for virtually the entire first half, overpowered by South Africa's pack at every turn but they showed resolve in defence to limit the half-time deficit to 8-6.

Inspired by the hard carrying of inside centre Damian de Allande, the Springboks pounded away at England's line time and again but had only a try by Sbu Nkosi to show for their efforts.

Remarkably, an England side heavily depleted by injury snatched the lead through Elliot Daly's 51st-minute penalty without having made a single visit to South Africa's 22 until that point.

That landmark was established soon after Daly had struck and Eddie Jones' men finally burst into life, showing the urgency and belief that was missing in a passive first-half.

At the heart of their fightback was Farrell, who justified Jones' description as the team's "spiritual leader" with a display of skill and resilience that helped avenge the 2-1 series defeat in June.

South Africa could have won it at the death only for a long-range penalty by Handre Pollard to brush the right upright before a late surge was foiled by Farrell's tackle on Warren Whiteley.

England rode their luck during a tense first quarter, drawing repeated warnings from Gardner with Maro Itoje his main target.

By the 16th minute Itoje alone had conceded three penalties, the third of which was accompanied by a yellow card, although he had least prevented Ivan van Zyl from scoring a certain try before killing the ball.

South Africa battered away at the line and Jonny May was the next to reprimanded by Gardner, who threatened another sin-binning for the next offence, as he sneaked in off-side.

A dismal line-out throw allowed England to lift the siege, however, and soon after Farrell landed a long-range penalty to cancel out an early three points from Pollard.

Itoje returned from the sin-bin and was soon given another ticking off by Gardner as a collapsed five-metre scrum invited more pressure, but once again South Africa's line-out throw was wild and the danger passed.

The Springboks renewed their attack with De Allende the spearhead, his speed and eye for the gap repeatedly generating momentum and with England stretched, Nkosi raced in at the right corner.

Both sides lost key men early in the second half to leg injuries as Tom Curry and Eben Etzebeth departed and the tempo of the game rose sharply with more rugby being played in the South African half.

The chaotic play unfolding suited England and suddenly they were breaking into the opposition half at will.
Daly kicked them ahead from close to the half-way line and when Farrell split the defence with a brilliant show and go, the Springboks were reeling once more as play swung from end to end.

Pollard booted a 45-metre penalty to wrestle back the lead but it was soon panic stations for his team-mates as England came again, but they rallied well with Farrell delivering the winning points amid a dramatic climax.