Rory Scannell was the Munster hero as Johann van Graan’s side fought back to snatch victory with a 55-metre match-winning penalty in a thrilling 25-24 Guinness Pro14 win at Thomond Park.

Trailing 12-7 at the break, Matt Fagerson sealed a bonus point for league leaders Warriors in the 50th minute, but replacement Alex Wootton and scrum-half Alby Mathewson struck in the final quarter to reduce the gap to two points.

Dave Rennie’s side appeared to be running down the clock, but referee Dan Jones awarded the hosts a penalty just before the clock ticked into red and Scannell shouldered the kicking responsibility, landing his effort from just inside the Glasgow half.

James Cronin got Munster off to fine start when he barrelled over from close range, aided by John Ryan’s presence to power his front-row colleague over the line.

The Warriors, playing with the aid of the breeze, grew into the contest and George Horne finished off a free-flowing move that began five metres in front of their posts, though the TMO was consulted to make sure the ball was grounded. 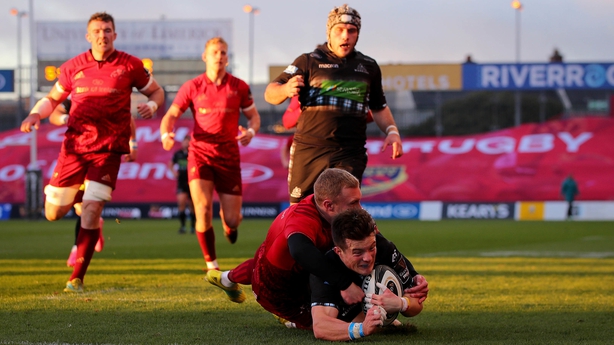 Out-half Pete Horne missed the conversion attempt and a subsequent penalty, but his namesake added his second of the evening with another superb attacking move to give the Warriors a 12-7 lead at the interval.

The second-half continued in a similar pattern and with the Munster scrum under pressure, Fagerson picked off the base of the scrum to make it a 10-point game in the 50th minute. 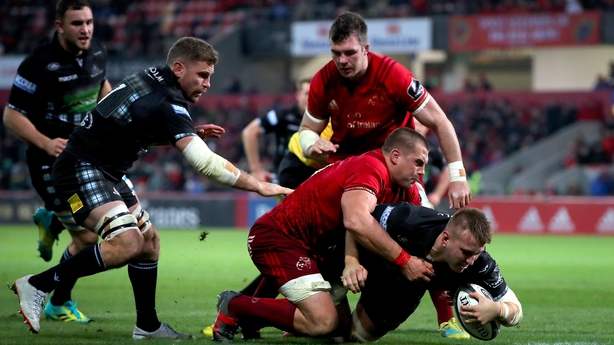 A JJ Hanrahan penalty was just rewards for the out-half's break moments earlier that saw him held up over the line as he desperately tried to ground the ball with three defenders for company.

On the hour, Glasgow got over again to seal the bonus after Horne gathered a clever kick and held off Wootton to twist over.

Wootton did give the hosts hope seven minutes later, sniping in the corner after Munster went through the phases.

That made it 24-15 to Glasgow and when Alby Mathewson snatched another try with eight minutes to go, the Thomond roar went up a few decibels. Keatley's conversion left two points in it.

There was still time for one last dramatic play as Scannell boomed over from distance to seal an unlikely win.