Ireland scrum-half Kieran Marmion is back in the Connacht side to face the Ospreys at the Brewery Field, Bridgeend on Friday (8.05pm).

The 26-year-old, who was injured in the Guinness Pro14 tie against Ulster before the Challenge Cup double header, is one of four Connacht players named in Joe Schmidt's Ireland squad for the November internationals.

He partners Jack Carty, who returns to the out-half jersey. 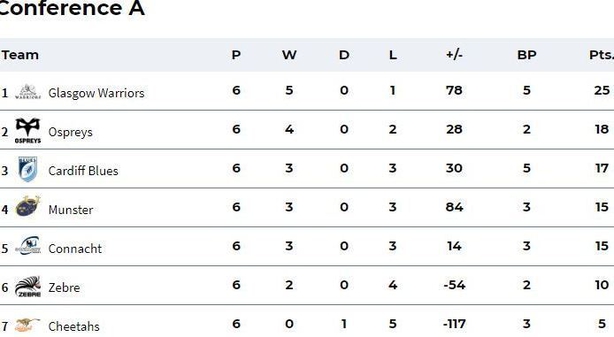 "We have a few of our more experienced players coming back into the side which is a big boost to the squad," Connacht boss Andy Friend said.

"Caolin Blade has done really well for us over the past few games, but it is great to have Kieran back as well.

"He is a really important player for us and he is fit and rearing to go. We also have Bundee back in our midfield alongside Tom Farrell.

"So overall, we are strengthened by our returning players for what we expect to be a tough fixture."

Here is the Ospreys team to play @connachtrugby on Friday night in Bridgend, as 18-year olds Harri Morgan and Tiaan Thomas-Wheeler make their first #GuinnessPRO14 starts…#MyTeam