Munster head coach Johann Van Graan says that Munster face a "massive task" as they travel to face Exeter in their opening Champions Cup game of the season.

Van Graan's charges go into the tie on the back of a Pro14 defeat to provincial rivals Leinster at the Aviva Stadium over the weekend, a game which the South African feels they could have won if they converted more of the opportunities they created throughout the thrilling encounter.

That defeat is compounded by the fact that Munster face a potential shortage of options at scrum half as Alby Mathewson prepares to see a specialist after picking up a knee injury against Leinster while Conor Murray, Neil Cronin and James Hart are also unavailable for selection.

It all amounts to a difficult assignment for Munster when they line out at Sandy Park on Saturday afternoon.

"Not a lot of teams go there and even get a point. You've just got to look at the score and they do punish teams there. You've got to be at your best to get away with even a point. We're looking to fire on all cylinders on Saturday afternoon. It's all about us, if you worry about the opposition too much you will go off task.

"I thought we did well over the weekend, we focused on our game. I thought we put the opposition under quite a bit of pressure and we're looking to do the same on Saturday.

"You can't really afford any slip-ups. You've got to win your home games in this competition, make sure you get one or two four-try bonus points. If you were to go down losing a game away, you've got to make sure you pick up points. 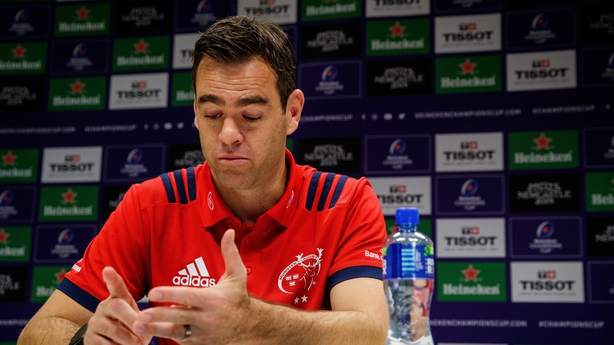 He added: "We've got Exeter away and Gloucester at home, two sides who currently sit in the top four of the Premiership and are playing some brilliant rugby so we're under no illusions about the task that awaits us.

"It's the same for every single team in the competition, it's one of the best competitions in the world and we can't wait for Saturday afternoon."

Remarking on Mathewson's injury, Van Graan said that the scrum half has been in 'quite a bit of pain for the last 24 hours.'

He conceded that losing his services would be a "big blow" for Munster but he is happy to place his faith in other number nine options including Duncan Williams and Jack Stafford for the meeting with the Chiefs.