Connacht Rugby CEO Willie Ruane says the €30m Sportsground redevelopment plan is a "significant statement" for both the team and the region as a whole.

The Irish province has reached an agreement with their co-tenants, the Irish Greyhound Board, and the owners of the land, the Galway Agricultural and Sports Society to carry out the work.

The new facility will include a new stadium with capacity for 12,000 spectators, with a new high-performance centre and greyhound racing track.

The Sportsground first opened in 1926, but despite modifications in recent years, the province has outgrown the venue. Three potential locations were considered, but redeveloping the College Road stadium in Galway city was always the preferred option. Talks to redevelop the site began almost 3 years ago. 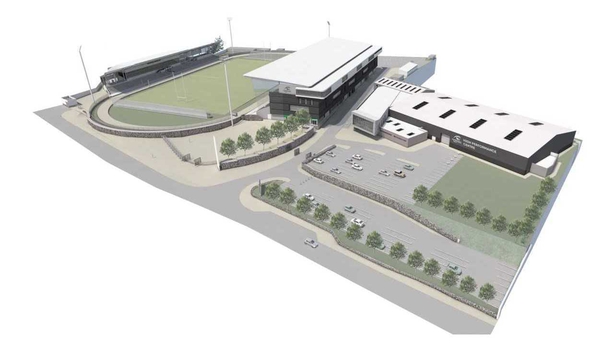 The new stadium will include two stands at either side of the ground, with terracing behind each goal. The new main stand will include dressing rooms and corporate hospitality.

CEO Ruane told RTÉ Radio 1's Morning Ireland programme that the project will be funded through a combination of public and private money and says the province believes it has a "compelling proposition".

The project is expected to cost in the region of €30m and will be paid for through a combination of public and private funds. Connacht Rugby intend to apply to the Large Scale Sports Infrastructure Fund for financial support.

The new pitch will be an all weather surface. The high performance rugby centre will include an indoor training pitch, along with treatment rooms, a strength and conditioning facility and administration and office space.

The multi-use facility will also be made available for the hosting of other sports, including soccer and gaelic games, if the demand arises.

It has taken three years but the redevelopment of The Sportsground is now a reality @Darrenfrehill has all the news from Galway #rterugby pic.twitter.com/mfVdEgd9Vu

"Where the demand arises, we would be very open to the facilities being made available for other sporting fixtures and events. We are very conscious of the need to provide a proper return on investment for any state support," Ruane said.

"This is a significant statement. Not only the ambition of Connacht rugby, but the region as a whole."

Connacht Rugby has held talks with local residents in Galway city and plans to host a full public consultation. Applications for planning permission and government funding will be submitted in the coming weeks.

The IRFU are also fully supportive of the redevelopment plans.

"The province has made huge progress on and off the field, and the development of these facilities will sustain Connacht Rugby into the future," IRFU CEO Philip Browne said.

"A high-performance training centre and a modern stadium are important for the future of rugby in the West of Ireland and the IRFU is fully supportive of, and looks forward to, the development of this exciting project."