Niyi Adeolokun's late try put the seal on Connacht's rousing 33-20 Guinness PRO14 win over Scarlets at the Sportsground, with Bundee Aki and 18-point fly-half Jack Carty starring for the winners.

The Westerners held the edge at the end of a very entertaining first half, leading 20-13 thanks to Tom Farrell and Cian Kelleher tries and Carty's accuracy with the boot. Johnny McNicholl added a try to Leigh Halfpenny's two penalties for the visitors.

Following a scrappy third quarter, the excellent Carty knocked over two penalties, and although Tom Prydie's seven-pointer put last season's runners-up right back in the hunt, Adeolokun's effort from a Caolin Blade turnover earned Connacht's first victory in four meetings with the Llanelli side.

Man-of-the-match Aki was in barnstorming form right from the off, gaining big yards on his first home start of the season. Connacht hit the front in the fourth minute when Aki's sidestep and powerful hand-off unlocked the defence and sent his centre partner Farrell in under the posts.

Carty returned the favour in the 16th minute before Halfpenny closed the gap to 10-6, with Aki unfortunate to go unrewarded for his turnover from a tackle.

As the pace of both attacks increased, Kelleher burst onto Matt Healy's short pass to finish crisply in the 25th minute, but again Scarlets bounced back impressively.

Just three minutes later they caught Connacht for numbers on the left and McNicholl threw a dummy to cut past Kelleher on the inside and Halfpenny's conversion restored the four-point margin.

Ed Kennedy's deliberate knock-on allowed Carty to make it 20-13 just before the break, with an obstruction call foiling a Tiernan O'Halloran break and a promising Scarlets move was spoiled by Kieran Marmion's interception.

Scarlets thwarted an advancing Connacht maul on the resumption, and flanker Kennedy broke up the hosts' momentum with a well-won breakdown penalty.

A tight TMO call favoured the Welsh region when Kelleher was deemed to have taken out McNicholl as the pair contested a Carty cross-field kick.

Marmion's excellent sniping around the fringes, coupled with a strong carry from Sean O'Brien, set up Carty's third successful penalty, early in the final quarter.

The Athlone man added his fourth after Werner Kruger infringed at a scrum, but having been starved of possession, Scarlets' attack lit up once more.

Rhys Patchell converted to leave it delicately poised at 26-20 - only for replacement Blade to pinch a ruck ball, setting up O'Brien to thunder past the 10-metre line and pass for Adeolokun to claim the clinching try.

The win lifts Connacht above Munster and Zebre into second spot in Conference A. 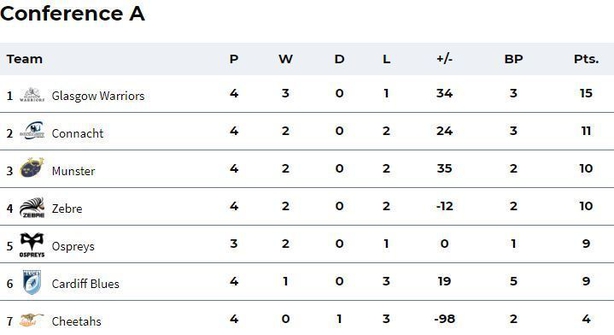