Munster were outclassed by a Cardiff Blues side who picked up their first win of the season with a 37-13 victory over the Irish province at the Arms Park.

Blues had lost their previous three games, each by a margin of less than two points, but ensured there would be no repeat by scoring four tries against Munster.

But the hosts overcame those setbacks to make a blistering start and looked to have taken a third-minute lead when Owen Lane rewarded a period of sustained pressure to cross, only for the TMO to rule out the try for an obstruction.

However, the hosts were not to be denied for long as a terrific burst from Halaholo set up a try for Nick Williams.

Munster responded with their first try when the home side lost possession on halfway and Conway capitalised by kicking ahead to win the race for the touchdown.

Worse was to follow for Cardiff when the visitors scored their second try within the space of three minutes.

Carbery burst clear from inside his own 22 to run 70 metres and, when the ball was recycled, Conway sneaked over in the corner. 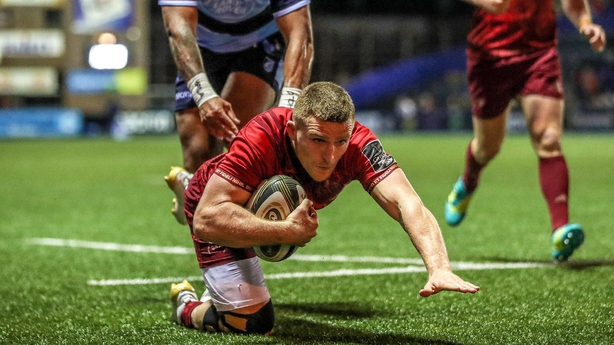 The frenetic opening continued with a fourth try in only 16 minutes as Halaholo tore the visitors' defence to shreds before providing Tomos Williams with an easy run-in.

The second quarter was less hectic, with Carbery's long range penalty the only addition to the scoreboard to leave Munster trailing 14-13 at the interval.

Within three minutes of the restart, Blues had their third try when a well-judged pass from Anscombe sent the outstanding Halaholo outside his man and over the line.

Anscombe converted with a superb touchline kick before knocking over two penalties to give Blues a healthy 27-13 lead going into the final 15 minutes.

Munster never looked like clawing back the deficit as they continued to make unforced errors against a Blues side who had too much pace and determination.

And the home side were rewarded when Anscombe fired over another long-range kick before a second try from Tomos Williams completed a miserable night for their opponents.