Munster racked up seven tries as they dominated much-changed Ospreys in a comfortable Guinness PRO14 win at Irish Independent Park.

They christened the Cork venue's new 3G modified pitch with a 15th-minute penalty try and converted scores from Joey Carbery, James Cronin and Rhys Marshall to lead 28-6 at half-time.

Although Ospreys travelled across as Conference A leaders, they made a dozen changes from their hammering of Toyota Cheetahs and rested captain Justin Tipuric, Alun-Wyn Jones and George North.

With Tadhg Beirne, on his first start, and the fit-again Chris Cloete impressing up front, Munster had the better of a frenetic opening 10 minutes, man-of-the-match Cloete making his mark with a muscular rip in the tackle and a trademark breakdown poach.

And man of the match goes to Chris Cloete - a huge performance from the @Munsterrugby man - he picks up his medal from Michael Lyons 👏#GUINNESSPRO14 #MUNvOSP pic.twitter.com/5iks5oqBHU

However, their best chance was spoiled by second-rower Beirne losing his footing after full-back Mike Haley had done well to regather his own chip.

Ospreys suffered a double blow when a powerful maul earned Munster their penalty try, with Georgian lock Nemsadze seeing yellow for collapsing it.

Davies landed a well-struck penalty in response, but his poor exit kick was turned into a second Munster try by a brilliant burst up the left wing from Carbery.

After a second successful penalty from Davies, Cloete's classy carry right up to the region's try-line set up prop Cronin to place the ball against the post for try number three. 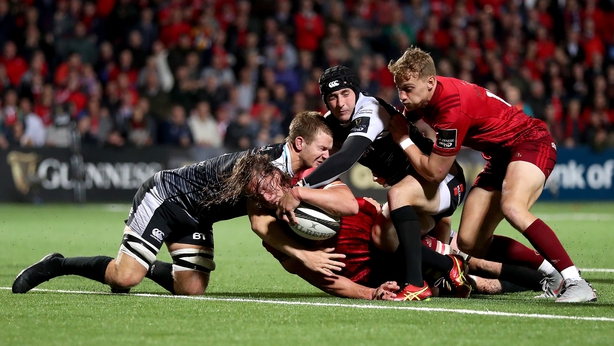 Carbery converted and also added the extras to Marshall's maul effort just before the interval, which was preceded by Beard's binning for a lineout infringement.

The 14 men leaked another maul try to Marshall two minutes into the second half and South African number eight Botha quickly followed him, barging over impressively following an O'Mahony interception.

Botha was held up soon after and Ospreys salvaged some pride with winger Morgan's opportunist 60th-minute score from a bouncing kick past halfway.