The home side trailed 14-10 at half-time but edged a gripping second period despite Leinster captain Rhys Ruddock claiming a try five minutes from the end, a score that put the match into the melting pot.

Right at the end Leigh Halfpenny forced a Leinster penalty just as the Irish side looked they might steal a victory - but the visitors had to settle for a losing bonus point from the 23-21 defeat.

Scarlets were indebted to tries from Ken Owens and Gareth Davies, while Halfpenny kicked 13 points.

It was the first time the two sides had met since Scarlets lost to Leinster in last season's grand final.

Scarlets were boosted by the inclusion of  Wales quartet Halfpenny, Jake Ball, Samson Lee and Hadleigh Parkes. It was Ball's first competitive game since  he dislocated his shoulder for Wales against New Zealand last autumn.

However, the Welsh region were missing British and Irish Lions centre Jonathan Davies, who sustained a hamstring injury in the warm-up against Ulster last week. 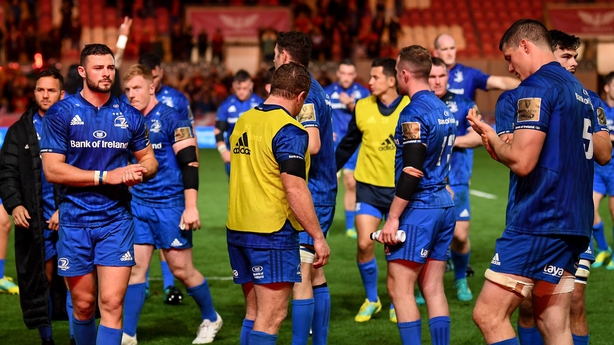 Scarlets dominated the opening skirmishes with Parkes and Jonny McNicholl on the end of a break into Leinster territory and flanker Josh Murphy received a yellow card in the sixth minute as the Irish penalty count mounted.

Scrum-half Davies went close but could not get the ball down, having been wrapped up in a Ross Byrne tackle, before the deadlock was broken in the 12th minute when captain Owens squeezed over for Halfpenny to convert.

Byrne missed a penalty in the 16th minute but at that stage Leinster had not been able to launch an attack - but one came nine minutes later when a concerted line-out drive from their own half gave them the momentum they needed as wing Fergus McFadden crossed for Byrne to convert.

Scarlets did edge back into the lead  from a Halfpenny penalty in front of the posts after a Ruddock high tackle on Blake Thomson.

But Leinster finished the half very much the stronger side and after Samson Lee was sin-binned for pulling down a maul wing James Lowe was sent into the left corner for Byrne to convert from the touchline.

However, Scarlets dominated the scoreboard in the second half.

Two Halfpenny penalties on 51 and 64 minutes to put them back into the lead and they then opened up a nine-point advantage when Gareth Davies went over after a Parkes break.

Ruddock squeezed over and Byrne's conversion saw Leinster get to within two points of the hosts  - and make for a very tense finish.