Munster paid for a leaky first-half display at Scotstoun as Glasgow Warriors inflicted a first Pro14 defeat of the campaign on Johann van Graan's men at Scotstoun.

The visitors, missing most of their Ireland stars, were blown away by a ruthless and powerful Glasgow display.

Munster trailed by 22-0 at half-time after Callum Gibbins, Stuart Hogg and Adam Ashe ran in for three tries between the 23rd and 37th minutes.

The hosts had the wind at their backs in that opening period and completed dominated territory, exerting heavy pressure for sustained periods.

The province did improve on the turnaround with JJ Hanrahan finally getting them on the scoreboard off the tee on 44 minutes. Rhys Marshall crashed over for a try with ten minutes to go and though Joey Carbery converted, that was as good as it got for Munster.

Tadhg Beirne played the second half in what was a frustrating Munster debut and Jaco Taute made his first appearance in over 11 months off the bench but they were the only bright spots on a tough night at the office. 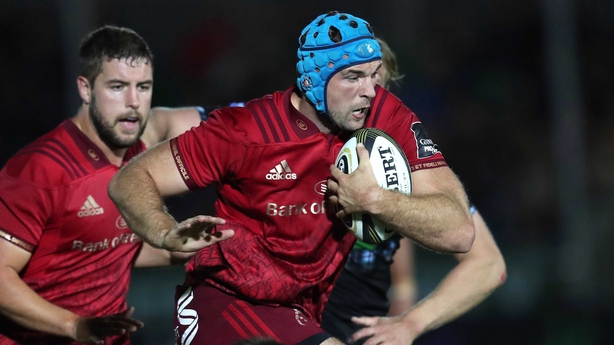 In perfect conditions at Scotstoun, Glasgow gained the first scoring chance only for Peter Horne to make a mess of a straightforward penalty shot.

However it was to make little difference as the hosts went on to totally dominate the renowned Munster pack and score three tries to race 22-0 ahead.

Six minutes later Horne did open the scoring with a penalty after Glasgow drove the Munster line out and then pinned the Irish side on their line.

Having won a penalty at a Munster scrum, Warriors produced the first try in 23 minutes as Jonny Gray found space and fed the impressive Adam Hastings, who slalomed through the defence before feeding Gibbins.

Six minutes later, Hastings poked a masterly kick off the outside of his boot and full-back Hogg touched down before taking over the kicking duties to convert.

A half where Munster had never penetrated the home 22 and lost captain Billy Holland as well as Neil Cronin to injury ended with stand-off Hanrahan failing to hold a pass following a scrum, allowing Ashe to pounce for Glasgow's third try.

Having made several changes, Munster profited from the restart to get on the scoreboard through Carberry, and from there the visitors were able to gain something of a foothold in the match.

The majority of the third quarter was played in the home half, with a 56th-minute penalty for a Glasgow high tackle allowing Munster to launch a three minute siege of the Warriors line that ended when replacement Fineen Wicherley lost possession.

Munster continued to monopolise possession and in the 70th minute the Glasgow line was finally breached, as Marshall came off the bench to cross close to the posts, allowing Carberry an easy conversion.

There was still time for the Warriors to get their score moving once again, but they were unable to claim a fifth point on the night and back up last week's bonus-point win over Connacht.