Leinster staged a superb second-half fightback to begin the defence of their Guinness PRO14 title with a 33-32 victory over Cardiff Blues.

Cardiff had looked set to topple the defending champions after building a 29-14 heading into the final half-hour at the Arms Park.

But three close-range tries from the visitors robbed Blues of a morale-boosting victory in a pulsating game.

The visitors, who started with only three players that began last season's European Cup final victory over Racing 92, conceded the first points when Evans knocked over a fifth-minute penalty.

The visitors then suffered two further setbacks in the next five minutes. First wing Barry Daly limped off, to be replaced by McFadden, before they fell further behind to a well-created try.

Blues earned a couple of penalties to gain a lineout 35 metres out, from where Evans split the visitors' defence to send Lee-Lo in on a 20-metre run to the line.

Evans missed the conversion but he looked to have helped Cardiff further extend their lead soon after when, following a powerful burst from Seb Davies, his clever kick was collected by Owen Lane who forced his way over the line.

However, the try did not stand as referee Nigel Owens ruled it out for a double movement.

It took until 21 minutes for Leinster to finally give Cardiff something to worry about as they picked up their first score with a Byrne penalty.

They then drew level with a try from Tracy, who capitalised on a line-out error from the hosts. 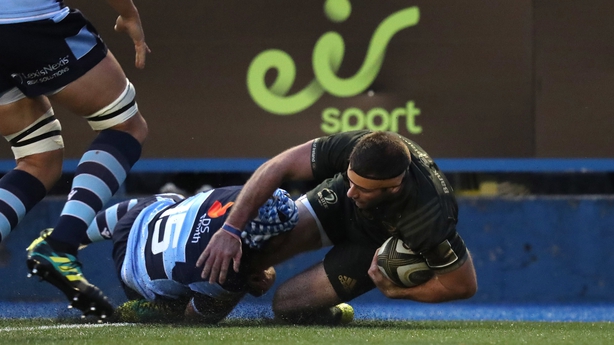 Byrne missed the conversion before he took a knock, meaning it was McFadden who stepped up after they were awarded a 32nd-minute penalty and his kick put Leinster in front for the first time.

That advantage did not last long, though, as it was their turn to make a hash of a lineout, allowing Cardiff prop Dmitri Arhip to seize possession to set in motion a flowing movement which ended with Harries stepping inside two defenders to score.

Evans converted with an excellent kick before Byrne nailed a long-range penalty to leave Leinster trailing 15-14 at the interval.

Cardiff came out flying at the start of the second half, though, and looked to have decided the match.

Within five minutes of the restart, they had extended their lead when an excellent round of passing from their three-quarters sent Harries sprinting down the touchline for a superb try.

Two minutes later, stunned Leinster conceded a fourth try, another splendidly created effort which culminated with Lee-Lo crossing for his second of the night to make it 29-14.

The visitors immediately changed the whole of their front row and were soon rewarded when one of them, Bryan Byrne, finished off a driving lineout to reduce the deficit.

The momentum was with Leinster and they soon added a third try when Gibson-Park forced his way over from close range for a converted score.

Cardiff still held the edge but, after Evans had slotted over a penalty to make it 32-26, Bryan Byrne broke their hearts with a try three minutes from time, with Ross Byrne's successful  conversion sealing a one