The 23-man matchday squad that was selected for the Grand Slam finale at Twickenham was pretty close to Joe Schmidt’s first choice selection.

Robbie Henshaw was unavailable through injury, as was Seán O’Brien, but it seems that the majority who featured that day are in the driving seat for a place in the 31-man squad selected for the World Cup next year.

Who else could come into the mix this season and challenge for a place?

Twelve months ago Ulster fans were still reeling with the IRFU’s refusal to offer scrum-half Ruan Pienaar a new contract. Their talismanic Springbok departed with a heavy heart for France, while the province turned to Connacht's reserve number nine John Cooney. It’s hard to think of a better signing.

In a highly turbulent season both on and off the pitch, the 28-year-old was a shining light for the province. 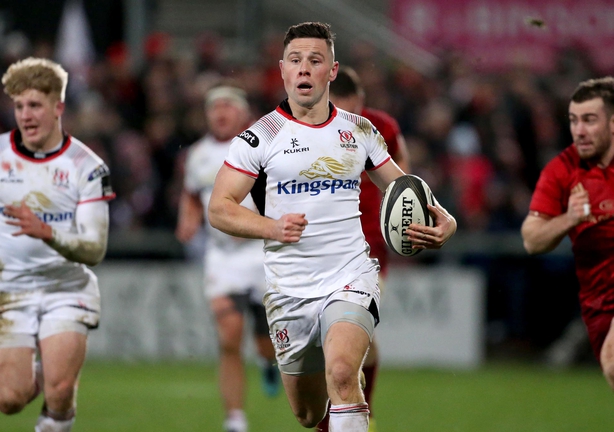 After just 27 games for Leinster in four seasons, he moved to Connacht in June 2014, initially on loan before making the switch permanent. Marmion however was the man in possession of the nine jersey and he also suffered a number of injuries, but his time at Kingspan Stadium has shown his undoubted qualities.

Cooney made 25 appearances last campaign and led the way in the Pro14 standings in points, penalties and try assists. His accuracy from the tee was a feature throughout the campaign and helped himself to 27 points in the Champions Cup victory over Harlequins in a European campaign that flattered to deceive.

The Dublin native made his Ireland bow during last year’s summer tour of USA and Japan, but despite his bright start to life with Ulster, he couldn’t dislodge Marmion and Luke McGrath as understudies to Conor Murray in the November internationals. 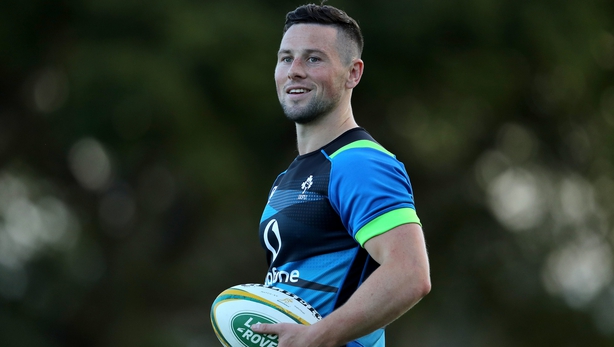 "I was pretty annoyed I didn’t make the November squad," he admitted at the time. "I was told I was close and stuff. All I can do is keep playing well for Ulster."

It was a similar story for the Six Nations, and got just one minute of action against the Wallabies in Melbourne in the victorious series victory Down Under.

A further chance to impress in green is imperative, while any injury to the aforementioned trio - Conor Murray is a reported doubt for the November series with a neck injury, which could allow him move up the pecking order.

Not a bolter in the true sense of the word as many expect the former Leinster and Scarlets player to be among the touring party to Japan next year.

Nonetheless, with just two caps to his name and huge competition in the backrow especially, he will have to hit the ground running at Munster to maintain his upward trajectory.

The Pro14 Players’ Player of the Year last season is equally at home in the second row, which could provide further opportunity to impress in green. 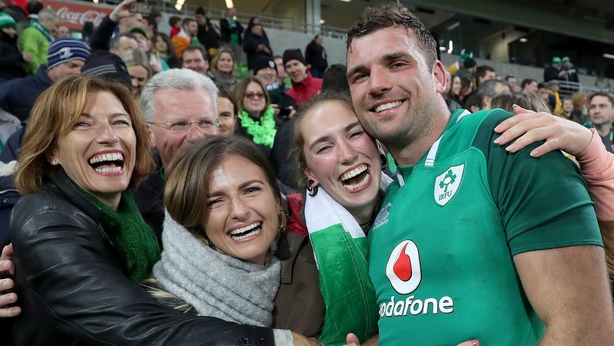 James Ryan, Iain Henderson and Devin Toner were the men in possession during the Six Nations, with the last the elder statesman and perhaps looking over his shoulder. Ultan Dillane and Quinn Roux will keep the pressure on, but Beirne’s versatility, and efficiency at the breakdown is a huge plus.

"He’s probably the best in the world on the poach," Peter O’Mahony enthused when the news broke of Beirne’s departure from Wales to Munster.

Wherever Schmidt sees fit to utilise the 26-year-old, he seems in a strong position 12 months out to depart for Japan.

The 25-year-old has all the traits that Joe Schmidt looks for in a winger. Defensively sound, strong in the air and a superb work-rate.

Sweetnam made his international bow in the drubbing of South Africa last November, acquitting himself well before getting on the scoresheet the following week against Fiji a week later. 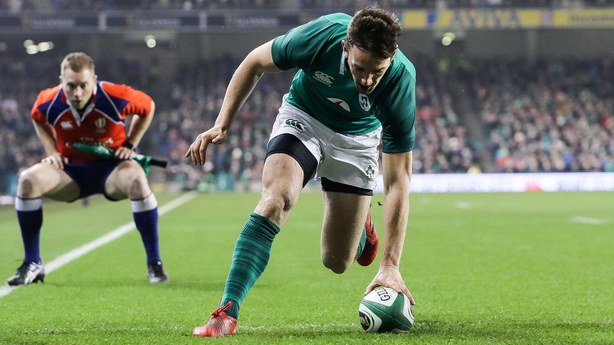 Will need to threaten more on the front foot - his try against Ospreys last December was followed by a run of 14 successive games without a score -  but has grown into a key figure at provincial level.

Admittedly it would most likely take a number of injuries for the Cork man to make the trip to Japan, but a good season with Munster would put him right back in the shop window, while the November internationals may present another opportunity to shine.

Despite Caelan Doris' undoubted quality, this is a long shot simply by dint of those ahead of him in the pecking order.

The backrow is stacked full of high-quality options, but it is also a position that is highly attritional. Seán O’Brien’s problems are long-standing, while Jordi Murphy, Josh van der Flier, Tommy O’Donnell and Rhys Ruddock have spent their fair share of time on the sidelines. The aforementioned Tadhg Beirne is another option.

Should anything happen to frontliners Peter O’Mahony, Dan Leavy or CJ Stander, or those next in line, it would leave the door slightly ajar. 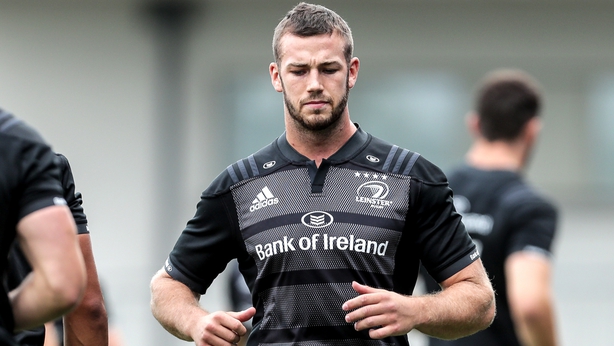 It may seem premature to tout a player with only one senior provincial appearance – 19 minutes as a replacement against Connacht last season – but Jordan Larmour has shown that it can be done, and the backrower is very highly thought of for both province and country.

The number 8 enhanced his growing reputation after an outstanding U20 World Cup campaign, with the captain topping the Irish tackle and offloading charts.

Jack Conan and Max Deegan are currently ahead of Doris at Leinster, and should get more opportunities to shine around the November internationals.

Leinster will undoubtedly be his only focus, but who knows what lies ahead for the 20-year-old.

So what happens if Rob Kearney and Jordan Larmour were both to suffer injury next year?

It would be an unfortunate situation for Joe Schmidt to find himself in, and as things stand, Andrew Conway looks the most likely to slot in at 15.

Conway has looked assured in the green jersey, while Connacht’s Tiernan O’Halloran will be looking to the last of his six caps which came against Japan last summer. 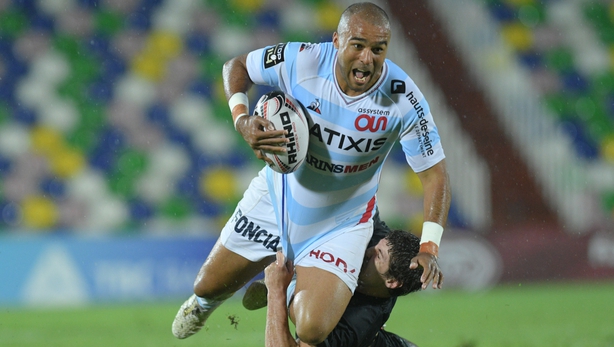 Zebo’s exile is likely continue while he is stationed on foreign shores, but there is no doubt he would bring something different to the table at full-back.

Last January Schmidt took the unusual step of publicly criticising a player when he gave reason why the Racing 92-bound player was not part of the Six Nations squad.

"There was some wayward passing, some turnovers that he'd look back at and be frustrated with himself. It's crucial at the time of selection that we know guys are in good form," he said. 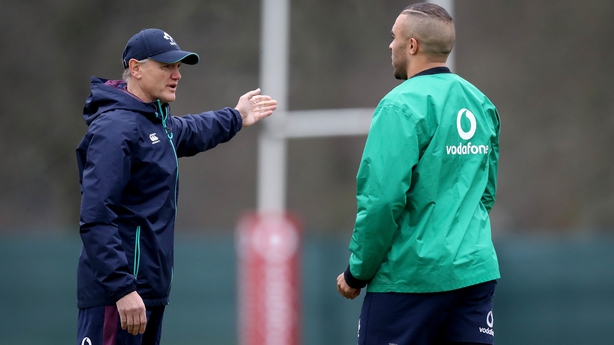 Zebo will be all too well aware that good form alone in the Top14 is unlikely to change the unwritten selection policy of foreign-based players, but it would certainly increase the clamour for his inclusion in the squad.

Zebo’s defensive skills, often used as a stick to beat him with and why many suspect Schmidt took some time to trust the utility player as a starter, has improved immeasurably and in a forward-dominated French league, will be tested even further.

The Ineligibles - An Ireland XV plying their trade abroad