New Connacht captain Jarrad Butler admits that he’ll be turning to John Muldoon for advice as he replaces the Sportsground stalwart.

Muldoon called time on a 17-year playing career with Connacht in April, taking up a defensive coaching role with Bristol.

Head coach Andy Friend has named Butler as Muldoon’s replacement and the loose forward revealed that he’s already been in contact with Muldoon after being named as captain.

Speaking to RTÉ Sport, the new Connacht skipper said: "I spoke to Mull’ yesterday actually, he sent me a message to say congratulations and I told him to expect a few text messages throughout the year asking for advice and things like that.

"If there’s anyone who knows it’s him and he’s been an amazing leader for this club for a long time and I’ll be looking to him and also trying to put my best foot forward and do the job some justice.

"It’s really exciting, to be asked to be a captain was really humbling and I’m just looking forward to taking on the role as best I can and having a good season.

🎬 | "Winning becomes a habit. There's a lot we can work on but it's a really good platform."

"Friendy spoke to me after that first game over in Brive last week and said ‘we’re going to do this’ so I was pretty stoked and just keen to get the season under way I guess."

While Butler may not be as vocal as Muldoon was as a captain, he's eager to lead by example on the pitch and is confident that he has enough strong characters around him to delegate some of his leadership duties.

"There’s so many strong leaders in our group at the moment and I could pull of five or six names who would do a great job as captain," he said.

"I’m looking forward to working with them as well and putting our best foot forward and having a successful season.

"On the field I’m just going to do the best I can and lead by example and talk when I need to but I think we’ve got some guys in all areas of the field who have got a lot of experience.

"We’ll be looking for guys like Quinn Roux and Ultan [Dillane] to speak and at scrum time we have Tom McCarthy so I want to be trying to lead the whole ship." 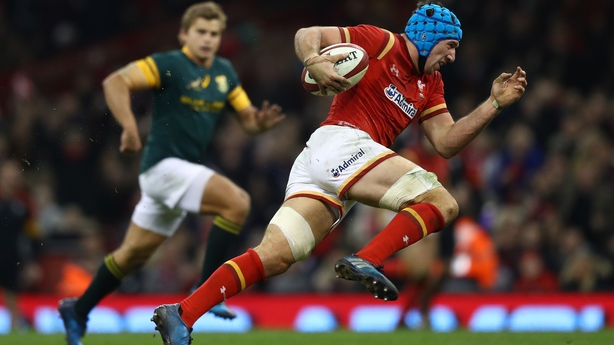 Meanwhile, Wales flanker Justin Tipuric has been appointed captain of the Ospreys.

The Guinness Pro14 side announced that 29-year-old Tipuric will take over the role from Wales skipper Alun Wyn Jones.

Jones has been Ospreys captain since 2010, leading the region a record 115 times.