Australia's Israel Folau has no plans to change his aerial technique despite picking up a one-match ban for a mid-air challenge on Ireland captain Peter O'Mahony in last month's test between the sides in Sydney.

The Wallabies full-back, who is renowned for his excellence at catching high balls using skills honed during spells in Australian Rules Football and rugby league, has also called for greater clarity in the laws of the game concerning aerial challenges.

"I'll still keep attacking the ball the way I do," Folau was quoted as saying by the Australian Associated Press.

"I think going forward I'd like to see a little bit more clarity within that particular area of the game, not only for myself, but other players are involved in those aerial contests -- I think it's vital and very important.

"I'll keep being persistent with the way that I attack the ball in the air and do it in a way that's obviously fair and clean."

The one-match ban, which he launched a failed appeal against, meant Folau missed the NSW Waratahs' away win in their vital Super Rugby clash against Melbourne at the weekend, but he will be back for Saturday's home game against the Sunwolves.

"Across the board, I think people feel that way," he added when asked if he was frustrated by any inconsistency over the laws.

"It's obviously out of our hands as a player to clear those things up. It's not going to be always clean in the sense that there won't be any contact, but I understand the dangers of being in the air.

"The last thing you want for yourself or for the opposing player is for anyone to get any serious injury." 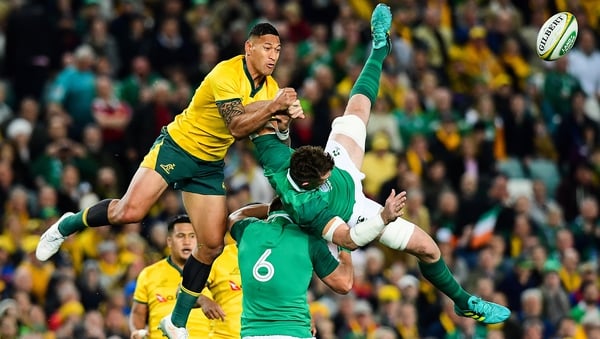