Eddie Jones called for England to remain unified after comparing their series-ending 23-12 defeat by South Africa at Free State Stadium to a "horror movie".

Frustrations boiled over after the final whistle when prop Joe Marler swore at a Springbok fan before Mike Brown continued the verbal exchange with a group of supporters and Ben Youngs walked away from a television interview.

For a second successive Test a blistering start, this time founded on tries by Mike Brown and Jonny May, was thrown away as the hosts struck back through a Duane Vermeulen touchdown and a penalty try won at the scrum.

South Africa have taken an unassailable 2-0 lead in the series heading into the final match in Cape Town on Saturday while England are left to reflect on a sixth successive loss - a run which includes five Tests - that cranks up the pressure on Jones.

"Obviously we're very disappointed," said head coach Jones, who revealed that Billy Vunipola may have aggravated the fractured arm that forced him to miss a large chunk of the season.

"(We) started the game well. It was a bit like a horror movie wasn't it? Almost a rerun of last week. It's a tough period at the minute. No one likes to lose five (Test) games in a row.

"We have been through an exceptional period and now we're going through this tough period.
"The players and coaches are putting in plenty of effort but for some reason are just not handling key moments of the game well.

"It's just about sticking together, understanding what you can improve and the emotions of the situation. If we do that we will get out of it. 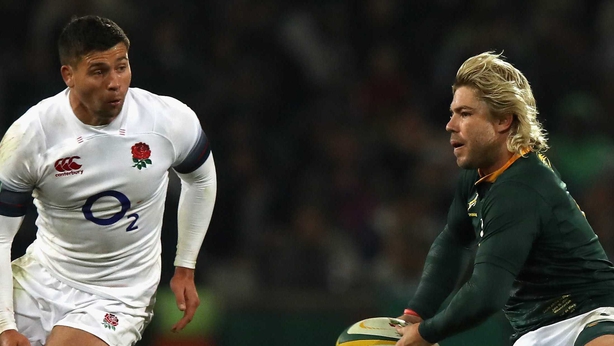 "We wanted to get out of it after one game. Unfortunately it has gone on a bit longer, but we'll get out of it."

England's anger spilled over at the end when Marler and Brown exchanged words with South Africa fans.
Youngs, the Leicester scrum-half, was also the centre of controversy after giving a curt answer to a question during a post-match broadcast interview.

He subsequently apologised on social media for conduct that was strongly criticised by Sir Clive Woodward in his role as a pundit.

"Just wanted to say sorry I walked off during my interview with Sky Sports," Youngs said on Twitter.

"Obviously was very emotional and disappointed with result. We go again in Cape Town."

England return to their camp on the Indian Ocean on Sunday before heading to Cape Town on Wednesday to finalise preparations for the final Test, which has been rendered meaningless by their latest collapse.

"This team has a lot of pride. We've won back-to-back Six Nations, we've equalled the world record for the number of Test wins, we've gone to Australia and won 3-0 and now we're going through this bloody tough period," Jones said.

"There's plenty of pride in there. Everyone is going to fight hard to get out of this and you'll see an absolutely spirited effort in Cape Town."