Peter O'Mahony said Ireland produced one of their best performances of the year to beat Australia in the second Test in Melbourne on Saturday.

Ireland bounced back from an 18-9 defeat to the Wallabies in the First Test in Brisbane last weekend to record a 26-21 victory over Michael Cheika's side in AAMI Park.

Despite conceding a try after 80 seconds to Kurtley Beale, and having to withstand a late surge following Jack McGrath's sin-binning, Ireland were otherwise dominant and were not in the slightest bit flattered by the scoreline.

Tries from Andrew Conway and Tadhg Furlong, along with four penalties from Johnny Sexton, proved enough to secure a first away win over Australia in 39 years, and set up a deciding game in Sydney next weekend. 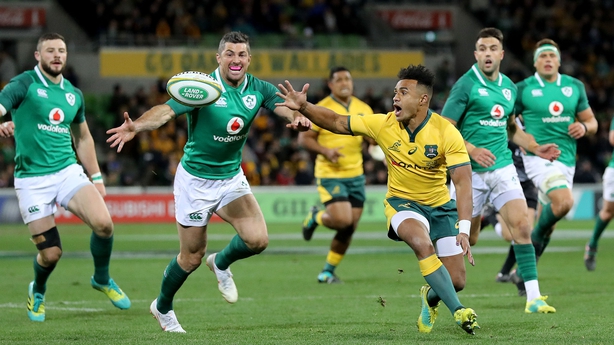 Speaking to RTÉ Sport's Michael Corcoran after the game, O'Mahony said Ireland had produced one of their best performances of 2018 to down the Aussies.

"It took a week's training and probably one of the best performances of the year to put that Australian side away. They are one of the best sides in the world for a reason and it was incredibly physical and intense out there.

"It would have been a nightmare to go to Sydney next week and for it to be a dead rubber. I think it was 1979 the last time Ireland won over here. That shows how hard it is.

"We've put ourselves in place to win a series and it would be an incredible piece of history over here."

O'Mahony praised the composure of the side in reacting to Kurtley Beale's early sucker punch.

"That kind of stuff happens in international rugby. It's a real sign of the group we have that there's no one panicking. You just have to scratch and get back down there. And we did. Straight back down there. I think we scored 16 unanswered points through pressure and penalty and that's a good sign of character."

And the captain had words of praise for the large Irish contingent in AAMI Park.

"Outstanding. I met a couple from London who travelled for the game and back home afterwards. We always have incredible support. And obviously, we've a big number of people living out here who rocked up. And it was an incredible showing from them as always.