Australia coach Michael Cheika said his team's work ethic was the key factor in their 18-9 victory over Ireland in Brisbane on Saturday but warned his players they would have to step up to another level next week.

Cheika blooded three new caps and got some big performances from his more experienced players as the Wallabies outscored the tourists two tries to nil to hand the Six Nations champions their first defeat in 13 tests.

Even if it was often far from vintage fluent attacking Australian rugby from the home side, Cheika was delighted with the work rate his team displayed in the opening clash of a three-match series.

"Looking at previous games, Ireland, particularly in the forward pack, have outworked other teams," he said.

"I felt like we needed to win the 'hard work' battle just to have a foothold in the game and then see what our backs could from there. We were far from perfect but I think that work ethic got us through."

If Ireland have become almost an exemplar of consistency as they have vaulted to second in the world rankings under Joe Schmidt, Australia mixed beating the All Blacks with two losses to Scotland last year.

Cheika has talked about little else but consistency and reducing Australia's penalty count this year and he will clearly not be changing his tune in the run-up to next week's second test in Melbourne. 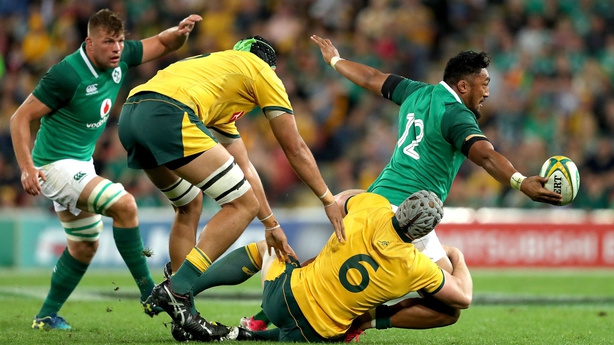 "The big thing for us has been consistency," he said.

"We have had real highs over the last couple of years and we've got to stay consistent over the rest of the series," he said.

"It's about mindset every week. We've got to have that winner's mindset all the time."

Scrumhalf Will Genia was outstanding despite having played no rugby for a month and Kurtley Beale was Australia's creative force at inside centre.

Skipper Michael Hooper gave a typically committed 80-minute performance in the back row and his fellow flanker David Pocock showed Australia what they had been missing last year.

"We knew it was going to be tough and it was in the balance for most of the game," said Pocock, who scored a try on his return to the test arena after a sabbatical.

"We hung in there and played with the ball. I guess it was good to get that win (but) there's plenty more to come. Hopefully we can build on that. We know they'll be better next week so that's the challenge for us."