Robbie Henshaw is in "good nick" and ready for an epic battle Down Under after a frustrating run of injuries denied him the chance to take centre stage when the medals were being dished out for province and country.

Henshaw dislocated his shoulder in the Six Nations hammering of Italy and watched from the sidelines as Ireland kicked on to win the Slam.

He then picked up a knee injury during Leinster’s Champions Cup final win over Racing 92 and sat out the Pro14 final slaying of the Scarlets.

Now, the 24-year-old is desperate to end a tough campaign on a high.

"It's a quick turnaround, straight into it after a tough few weeks," he told RTÉ Sport's Michael Corcoran ahead of the first of three Tests against Australia on Saturday.

"It's crept up pretty quickly. The atmosphere around the camp is pretty good. Getting over the jet lag and the travel is the hardest thing to get across but we got two good sessions in during the week and we're feeling fairly refreshed now. It's all looking good.

"I'm in good nick. Getting the body right after the travel was a big thing. Today was a really sharp session. The boys are buzzing to go for the game on Saturday." 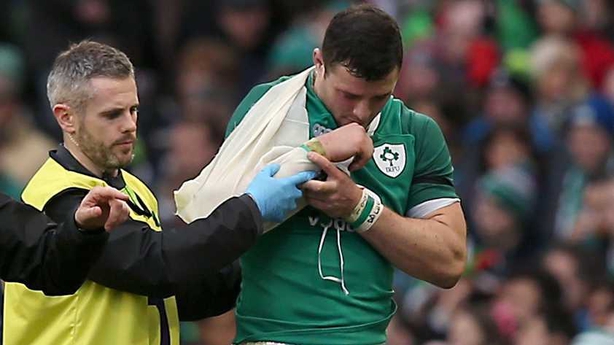 Taking on the Wallabies at Suncorp Stadium is a daunting task. They turned over the All Blacks there last October and have a formidable record at the Brisbane venue.

Henshaw said lessons must be taken from the 2016 tour to South Africa is they're to come home with the bragging rights.

"We're going to have a crack. It's going to be incredibly tough, as you saw with our last tour South Africa. We started off with a really good performance and we came short in the final two Tests.

"We know it's going to be a squad effort. We're going to have to be at our best and get better as the weeks go on.

"It's their fortress I'd say in this country. They play really well there and they enjoy playing there. From the first minute to the 80th, we need to be switched on."

Follow all three Saturday Tests between Australia and Ireland with our live blogs on RTÉ Sport Online and the RTÉ News Now app and listen to live commentary on 2fm from 10.45am (11am kick-off).