Chris Ashton plundered a hat-trick of tries as the Barbarians condemned England to an embarrassing fourth successive defeat by emerging 63-45 winners at Twickenham.

Ashton carried his record-breaking form for Toulon into his first appearance against the nation for whom he won 39 caps until departing for France last year, resigned to Eddie Jones' indifference.

The 31-year-old hopes to revive his England career in the future and this performance, albeit in a match where defending was low down both team's agendas, issued a reminder of his artistry as a finisher.

The chances largely dried up after he raced into the right corner for his third, celebrating with a second 'Ash Splash' of the afternoon, although in the final quarter he was denied for the second time by George Ford who had the beating of him for pace.

Chaotic and unpredictable, it was hard for Jones to draw any meaningful pointers from a non-cap international and first defeat in the fixture since 2014 that serves as the prelude to next month's tour to South Africa. 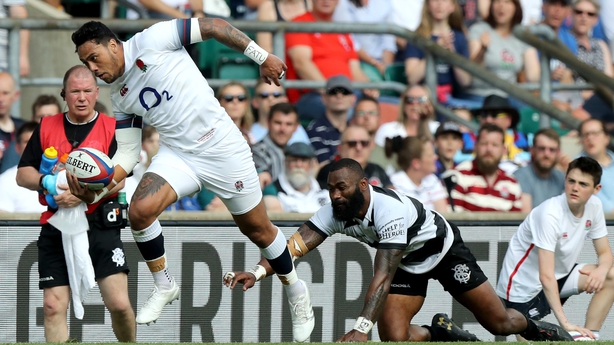 They were beaten 9-6 on the try count despite fielding seven regular Test team starters, all of whom were involved in the NatWest 6 Nations, and having been in camp for two weeks.

The experiment of playing Elliot Daly at full-back worked for as long as it lasted, Henry Trinder's concussion-enforced exit forcing him to slot in at outside centre where he was every bit as effective.

The decision to pick Mike Brown on the left wing was puzzling, however, Jones explaining it was to see if the Harlequins full-back can cover multiple positions at the World Cup and by the third minute he had his answer.

Josua Tuisova showed Brown a clean pair of heals to tee up Ashton for an extravagant finish and soon after the wing was over for his second after gathering Finn Russell's chip.

It would have been a hat-trick inside the opening 10 minutes had he not been caught by Ford after being given a clear run to the line by Tuisova, but England were in pieces and Victor Vito capitalised by spinning over from close range.

Daly stemmed the flow after an overlap was exploited and the frantic pace continued when hooker Jack Singleton charged through a hole before feeding Piers Francis the scoring pass. 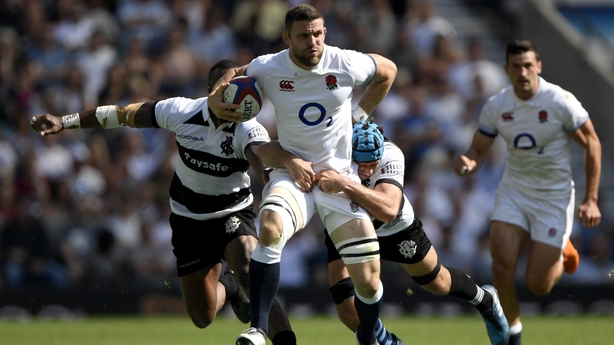 Ashton's hat-trick arrived in the 25th minute, slick passing and movement providing the chance, before a slippery run from Daly ended when Zach Mercer crossed.

The score was levelled at the half-hour mark when Ford showed patience during a crab-like run and released Francis to score, but then Ashton turned provider by racing through a gap to send Russell over.

A weak tackle from Chris Robshaw waved Semi Radradra over for the Barbarians' sixth try, but a penalty by Ford and a Joe Launchbury try from close range reduced the gap between the rivals to four points.

Sitaleki Timani finished a daredevil team move before Greig Laidlaw popped up on the right wing to put the result beyond doubt, and the closing moments were lit up by tries from Jonny May and a second for Vito