Australia coach Michael Cheika says he believes that the opposing views of two of his star players will not cause a distraction within the camp ahead of the visit of Ireland.

Ireland boss Joe Schmidt today named a 32-man squad for the three-Test tour starting on 9 June, and Cheika is due to announce his panel next week and looks certain to include both Israel Folau and David Pocock.

Cheika said he did not anticipate any problems from Folau's forays onto social media after the fundamentalist Christian full-back was recently criticised for saying homosexuals would go to "hell" if they did not "repent".

Pocock is an advocate for marriage equality but has not spoken out publicly about his team-mate’s pronouncements.

However, Cheika revealed that the pair spoke during a recent team get-together and that the situation will not cause concern in the build-up to the tour. 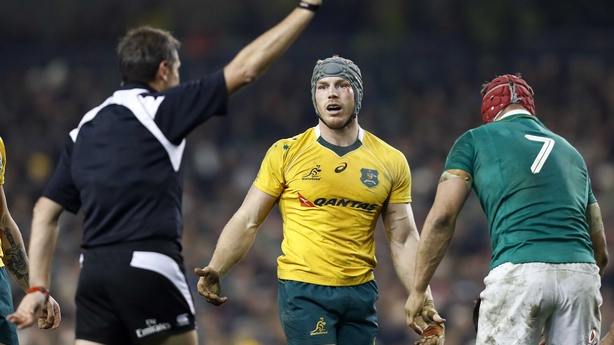 "[Israel’s] definitely going to post stuff [in the future], isn’t that what that [social media] is for? But the right stuff, stuff he believes in.

"We were all together in the camp for the couple of days we were there.

"Even if we don’t all agree, you can still all get on.

"If anything, it allows them to have more of a connection in the fact that they can discuss whatever they’re talking about and getting on with it … that’s what they’ve been able to do."

Follow Leinster versus Scarlets in the Pro14 final via our live blog on RTÉ.ie and the News Now App from 5pm, or listen to live commentary on RTÉ Radio 1'S Saturday Sport.