Leinster went down 27-22 away to Clermont in the 2017 semi-final, with two late kicks from Camille Lopez proving to be the difference between the sides.

The Irish province made no such mistake in this year’s semi-final with a comprehensive victory over the Scarlets and now all that stands between them and their fourth European Cup triumph are Racing 92.

Henshaw admits that the Leinster squad were rocked by last season’s semi-final defeat but that they channelled that disappointment into a positive.

Speaking on 2FM's Game On, he said: "As a player these are the weeks you really want to be involved in. Looking back on last year, we were hurt from how the semi-final went away to Clermont in France.

"It showed in our body language and in our play how we really wanted it and we had that bit of hurt from losing to Clermont last year.

"We got together last at the end of the season and said we needed to go one better and thankfully we’ve put in serious work. We’ve used nearly the entire squad throughout the year to get here so it’s been a really good collective performance.

"We’ve got one more to go and please God we come out the right side of it." 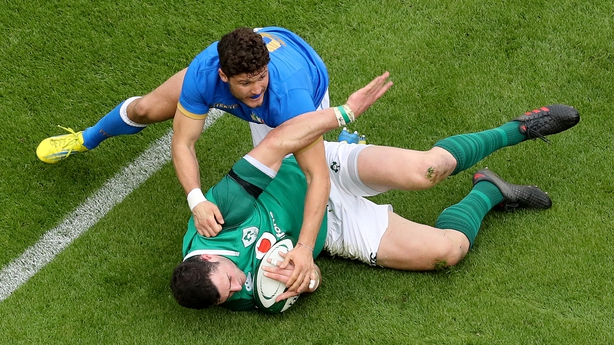 For Henshaw, Saturday’s final is all the more sweet given the fact that so few people expected him to be fit for it.

The Leinster centre was stretchered off during Ireland’s Six Nations victory over Italy back in February when he dislocated his shoulder while scoring a try.

The initial prognosis had him returning in June and hopefully being fit for Ireland’s summer tour of Australia but his recovery was so impressive that he was able to line out for Leinster in that semi-final against the Scarlets when he put in a Trojan shift.

Reflecting on the injury and his return, Henshaw paid tribute to the medical staff that helped him make such a speedy return.

"Just the work we put in, in the rehab and with a really good surgeon, I just got straight back into it. A lot of people are asking how has it come so quick?

"After a tough injury you can sit around for a couple of weeks and be down in the dumps but a couple of days after I was actually in here, in Leinster, and I was doing little bits that I could.

"The sooner you get out of a sling the better and thankfully I was out of the sling within a week and the recovery kind of flew then. I had no real setbacks, which was brilliant."