Coughlan played for three years with Top 14 outfit Pau, where he is now an academy coach, and has had a bird's eye view of Ryan's impact in Paris.

Ryan left Munster last summer but had to wait until December to make his debut in France due to a neck injury.

He has since established himself as the key man in Racing's second row; and having helped turn over his old team in the semis, he's now desperate to sink Leo Cullen's Leinster.

"Donnacha has been exceptional," Coughlan told RTÉ Morning Ireland. "Obviously he had a tough start, he was injured at the start of the season... but even the referees have noticed how good he is, how receptive he is, how disciplined he is.

"He really is that hard nut in the Racing group that allows the other guys a little bit more freedom.

"Everybody who has played with him or against him knows he's an exceptional player and he brings an awful lot to that Racing team." 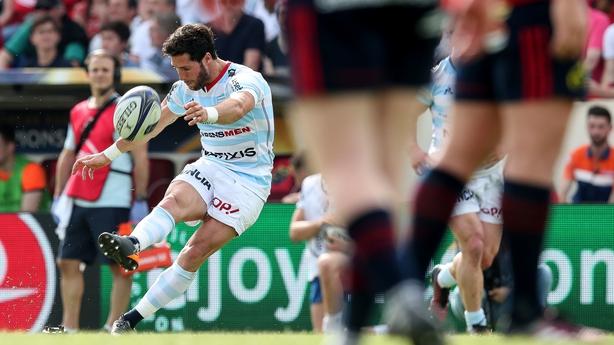 As good as Ryan has been, Coughlan said the loss of Maxime Machenaud is as big a blow as they could have endured.

He limped out of the Top 14 win against Bordeaux-Begles after rupturing his anterior cruciate knee ligament and is facing nine months on the sidelines.

"He is the fulcrum of everything they do," Coughlan said of the scrum-half.

"He is going to be a massive loss, and a massive loss for France too. There's no doubt Racing will have other quality players who'll be looking to step up and make the difference at the weekend.

"Are they the same team without Machenaud? I don't think so. But they have a quality group and we'll see at the weekend if someone else is going to put their hand up and take control of it.

"With the quality and the internationals they have in the group, they're a fantastic outfit. They have a really good coaching staff; obviously ROG was there for years so he would know the ins and outs of it.

"I think whoever gets a lead will go on and win it. If it's Leinster they can get into their groove, they've got some super attacking options. Racing, if they get ahead, they'll be comfortable, they've got a really strong defence and they'll back that, they've discipline.

"I think Leinster will win but it will be very tight. It's a cup final; anything can happen on the day."