Lansdowne's potent mix of pace and power saw them progress to their first Ulster Bank League final since 2015, following a 36-19 semi-final over Garryowen at the Aviva Stadium this afternoon.

Jet-heeled winger Adam Leavy started and finished the try-scoring, bagging a well-taken brace on the same pitch that his older brother Dan has starred on for Leinster and Ireland this season.

Table toppers at the end of league phase and boosted by last week's Bateman Cup title win, Lansdowne outscored the Light Blues by five tries to one.

The Limerick men deserved to be closer given their collective efforts, but brothers Neil and Liam Cronin combined for their only points, including the latter's 75th-minute try.

Mike Ruddock's side fell behind to an 11th minute penalty from Garryowen captain Neil Cronin, who rewarded a well-timed scrum from his forwards.

Early in the second quarter, Leavy replied with a try in the left corner, evading the clutches of the covering Jamie Gavin.

5th try for @LansdowneFC 35-19 at full time. Well done Lansdowne and best of luck in the final.

Scott Deasy and Cronin traded penalties as it remained nip and tuck up to half-time, Lansdowne holding onto a slender 8-6 lead.

However, just like last Saturday's Bateman Cup decider against Cork Constitution, the headquarters club moved clear in the third quarter.

Scrum half Alan Bennie sniped over for a crucial try, getting the ball down despite the best efforts of Liam Coombes.

The visitors failed to panic, Bennie's opposite number Cronin cutting gap to 15-12 after Lansdowne were penalised in the scrum again and then for a high tackle.

The hosts turned to their well-drilled pack, which included fit-again skipper Ian Prenderville and Leinster's Peter Dooley off the bench, to widen the margin.

They won a 56th-minute penalty try after Garryowen were guilty of collapsing a maul, and hard-working hooker Tyrone Moran deservedly added a fourth try soon after.

Fresh legs off the bench inspired a late Garryowen revival, with replacement hooker Liam Cronin muscling over to reduce the arrears to 29-19, but a turnover in injury-time allowed Connacht Academy youngster Leavy to have the final say as Lansdowne moved within 80 minutes of a famous All-Ireland League and Cup double.

With classy out-half Tomas Quinlan notching an impressive tally of 17 points, Brian Hickey's charges overcame the stubborn challenge of an ambitious Terenure side.

Tries in each half by Robbie Carroll and Jake Swaine kept 'Nure in the reckoning, but thanks to key scores from Quinlan and replacement Evan Mintern either side of the interval, it was Con who prevailed. 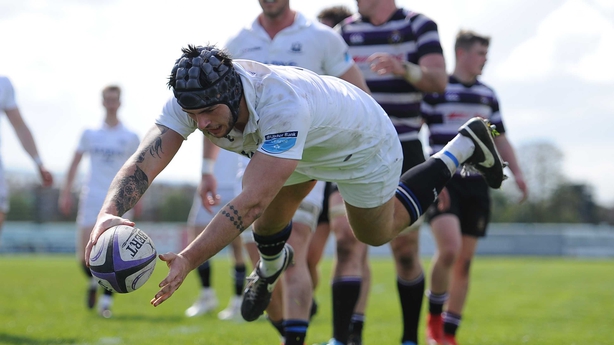 Following a late tackle on number 8 Luke Cahill on 15 minutes, Constitution broke the deadlock with a routine penalty from Quinlan.

While this was an early setback for 'Nure, James Blaney's men turned the game on its head with a superb try from centre Carroll, who used a lovely step to go over in the corner just past the first quarter.

Although O'Neill's touchline conversion was wide of the mark, the hosts were now hoping to build momentum for the remainder of the half.

However, thanks to a six-point salvo by the reliable Quinlan, Con took a 9-5 cushion into the second period.

After O'Neill cancelled out another Quinlan three-pointer after the restart, Munster prospect Mintern entered the fray to put the Leesiders firmly in the driving seat.

When scrum possession on the left was switched towards the far wing, the powerful back rower was in the right place to drive over the 'Nure line.

Well done to our lads, who battled to the bitter end, and almost snatched it.
Heads held high. #Nure

The outstanding Quinlan, Con's 20-point from last year's league final, converted his fifth penalty of the game in the 71st minute, giving the visitors a 22-8 buffer.

Tenacious Terenure were not prepared to go down without a fight, however, and winger Swaine was picked out for a simple finish in the right corner.

O'Neill added the extras to bring the deficit down to seven points, but despite losing prop Ger Sweeney to the sin-bin, Constitution held firm to set up an Aviva Stadium rematch with Lansdowne who beat them 32-12 in last Saturday's Bateman Cup final at Temple Hill.