Ulster stayed in the race to make the Guinness PRO14 play-offs by claiming a 36-15 bonus point victory over Glasgow at the Kingspan Stadium in their last regulation season home game.

Nick Timoney's injury time try - his second of the game - brought Ulster the five points they needed to also secure a likely Champions Cup play-off place at home to Ospreys by securing fourth place in the Conference B table.

The Irish province are now four behind Edinburgh heading into next week's last round of games.

Ulster who led 16-10 at half-time, also scored tries through John Cooney and Sean Reidy in what seemed likely to be the last home games from Tommy Bowe and Paul Marshall - both due to retire - and possibly also Charles Piutau, who departs to Bristol.

Cooney put Ulster - who were missing Iain Henderson due to the birth of his first child - in an early lead with a fourth minute penalty after Tim Swinson failed to release in a tackle.

Ulster then came close to getting over the line only for Luke Marshall's pass to miss Piutau but, after Glasgow had taken a quick throw only to be driven back over their line, the five-metre scrum saw Cooney pick up and rather too easily scoot over the line under the posts.

Cooney then converted his 12th minute score to put Ulster 10-0 up.

The home side then lost key forward Jean Deysel to injury and, almost immediately, the Warriors had their first points through an 18th minute Finn Russell penalty.

Three minutes later and they were over the line after Fraser Brown had burst through Andy Warwick to set up Callum Gibbins who got in under the posts allowing Russell to convert and tie the scores at 10-10.

Cooney kicked his second penalty after Glasgow strayed offside and put Ulster 13-10 up in the final minute of the half.

After Glasgow had kicked out on the full, Ulster attacked and were awarded another penalty in injury time which saw the Irish province lead 16-10 at the break.

This lead was cut seven minutes into the new half when Gibbins got his second off a rolling maul after Rob Herring had been penalised at a ruck.

Russell, however, hit the upright from a difficult angle and Ulster's lead was cut to just 16-15.

But, in the 54th minutes, Ulster scored their second try when Timoney shrugged off two tacklers following some good approach work by Stockdale and McCloskey. 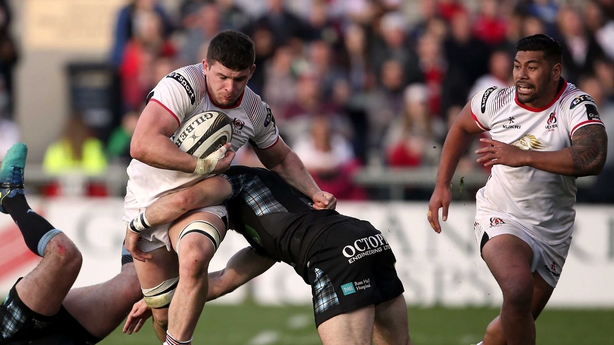 Johnny McPhillips - taking the kicks due to Cooney not returning after half-time - landed a great conversion and the home side were eight points clear.

Then they came again and on the hour Reidy pirouetted through two tacklers to dot down after Ulster had stretched the Warriors on both flanks.

McPhillips missed the conversion though but Ulster now led 28-15 and when Luke Marshall was held back in the 68th minute, McPhillips stepped up and made it 31-15.

Then, deep into injury time, Timoney drove over in right corner after a sustained Ulster attack to claim the all-important bonus point with replacement Angus Curtis missing the extras.