Ulster Rugby's CEO says he cannot see Paddy Jackson or Stuart Olding returning to play with the province or country in the future.

Jackson and team-mate Olding had their contracts, which were due to expire at the end of next season, revoked on Saturday, following an internal review into their conduct.

The duo were acquitted last month of raping the same woman after a high-profile Belfast trial.

"That is not something that is being envisaged," Shane Logan told the BBC about the possibility of the players being selected for Ulster again.

Asked about their chances of appearing for Ireland, he said: "The position is joint. It's a joint Irish and Ulster rugby position.

"The statement is clear and it is not something that we are contemplating."

Logan added it would be "completely inappropriate" for him to comment on the terms of the financial settlement reached between the players and the unions but did admit that the decision to cancel the contracts was partially based on information that is not in the public domain.

"This was a decision taken because the two guys in their own words admit that their behaviours fell short of what they knew were expected," he said. 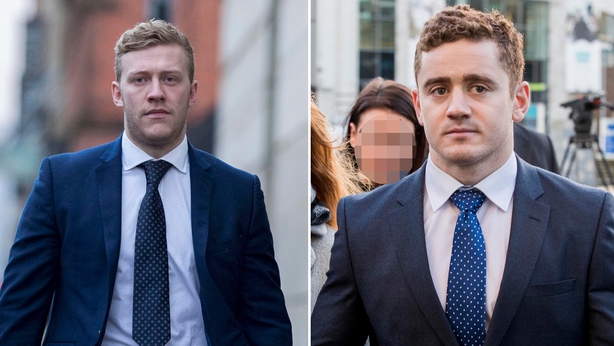 The reigning Top 14 champions are one of a number of clubs linked with Jackson since the cancellation of his Ulster and IRFU contract over the weekend.

"There is no contact between Paddy Jackson and the club and no desire on our part to engage his services.

"I trust our workforce in this position where we do not lack resources with Camille Lopez, Patricio Fernandez, Ice Toeava and Dorian Lavernhe...

"With the constraints imposed by the salary cap, it is not possible to strengthen the position of out-half, where the internal solutions are numerous. "

On Sunday, English side Exeter denied reports linking them with a move for Olding.