Bernard Jackman believes that the Thomond Park factor could give Munster the edge over Toulon in their Champions Cup quarter-final, despite the province's on-going injury issues.

Toulon travel to Limerick in fine fettle, having warmed up for the game with Top 14 demolition of Clermont last weekend, as they ran out 49-0 winners.

Munster overcame Scarlets 19-7 last time out but their chances aren’t helped by a rash of recent injuries which rules some of their key players.

Question marks also remain over Simon Zebo and Andrew Conway, although Zebo is looking more and more likely to be fit.

Jackman bemoaned Munster’s fortune when it came to their injuries, but he still believes they have enough to get past Toulon, particularly with a full house in Limerick behind them.

"It’s cruel luck for them to lose so many key guys in a short space of time," the Dragons’ head coach told RTÉ Sport.

"It’s definitely testing the strength and depth of their squad, which you wouldn’t say on paper is as strong as the likes of Toulon and Leinster, that’s because of budget.

"Also they’ve had a change of coach since the majority of work was done to qualify as well, but Thomond Park, you can’t underestimate how special that is on European days.

"I think they will need to tap into that emotion in the crowd."

"They have to make sure they’re incredibly physical and they outwork Toulan, who wouldn’t be anywhere near as fit as Munster. If the game is high tempo that will suit Munster." 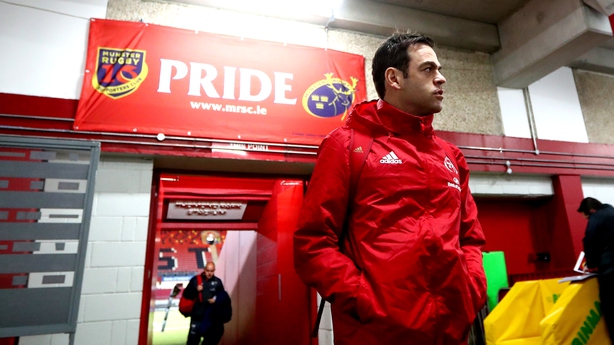 While Jackman admits that Toulon have the players to hurt Munster, he questioned their ability to deal with the cauldron that is Thomond Park on a big European occasion.

"What Toulon have are individuals who can score tries out of nothing," he said. "I watched them at the weekend when they beat Clermont.

"It was a home match but they beat Clermont 49-0. You watch that and you go ‘wow, these guys are contenders’.

"Now having said that, they have to go away from home. The great Toulon team with Johnny Wilkinson and Bakkies Botha, they did it away from home and at home in France.

"This team have a lot of star names but have they got the leaders who are going to step up? It’s not certain who’s going to play 10 for them. If it’s [Francois] Trinh-Duc, he’s coming off the back of a pretty much hit and miss Six Nations campaign and looks a little bit flakey.

"If you’re not in the best form as a number 10, Thomond Park is a place that has exposed a lot of people who don’t have that mental strength. Potentially, that’s an area that Toulon might struggle in."