Munster recovered from a shaky start to battle past Scarlets and post a timely win over the defending Guinness PRO14 champions at Thomond Park.

Tries at either end of the second half from Robin Copeland, who won his third man-of-the-match award in as many home games, and Alex Wootton sealed a hard-fought victory for the Irish province, who host Champions Cup quarter-final opponents Toulon at the same venue in a week's time.

Scarlets also have European matters on their mind, entertaining La Rochelle on Friday night, and they were looking for a big result on the road with Leinster currently heading them in the Conference B table.

They burst out of the blocks with scrum-half Aled Davies' barnstorming try in the seventh minute, but his opposite number James Hart cut the gap to 7-5 at half-time after muscling over from a five-metre scrum.

This hard-edged repeat of last season's Championship final, which saw Scarlets put 46 points on Munster in Dublin, was ideal preparation for the sides' European encounters next week.

The visitors showed that sort of form early on when full-back Tom Williams scythed through a gap and James Davies popped up as the link man and fed Aled Davies, who showed speed and strength to score, with a combination of Wootton and Calvin Nash unable to stop him from a few metres out.

Superb second half as we record a vital Guinness PRO14 victory! Next up, Toulon here at Thomond Park in the Champions Cup quarter-final next Saturday! #MUNvSCA #SUAF pic.twitter.com/oFpw79IpkC

A TMO decision ruled out a 70-metre intercept try for Wootton, the ball having come off the winger's bicep, before the set-piece efforts of John Ryan and Jean Kleyn, in particular, had Munster mauling for the line.

They were held up before Hart did just enough to get the ball down from the ensuing scrum.

Ian Keatley missed the conversion and Patchell's subsequent penalty attempt came back off a post as Wayne Pivac's side went off at the interval with a two-point advantage.

Number eight Copeland was key to Munster's upping of the intensity after the restart. He produced a crucial steal in his own 22, before a lineout downfield saw the home forwards carry strongly, the final surge seeing
Copeland reach over to score ahead of the Munster-bound Tadhg Beirne.

Keatley converted for a 12-7 turnaround but flanker Tommy O'Donnell added to the province's growing injury list when he went off with a shoulder injury. 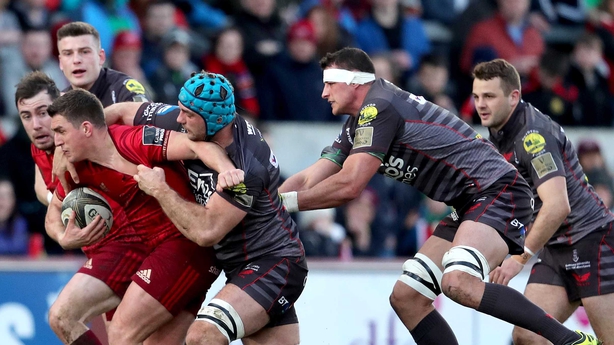 They also felt aggrieved when James Davies avoided the sin-bin for a trip on Sam Arnold, and Munster replacement prop James Cronin had a try ruled out for a double movement, with referee Marius Mitrea stepping in to stop Keatley's conversion attempt and consult with TMO Matteo Liperini.

Although Pivac clearly had one eye on La Rochelle in making all eight replacements between the 53rd and 66th minutes, Scarlets remained dangerous in attack and went close through Steff Evans but he was unable to latch onto his own kick.

However, Munster made certain of victory when full-back JJ Hanrahan's quick-witted break took them back into the visitors' 22.

They again took Scarlets through the phases before Fitzgerald found Wootton, who got the better of Tom Varndell with a determined 77th-minute finish out wide.

They almost had a late bonus-point score via centre Arnold's rampaging run, but the three tries still saw Munster strengthen their grip on second place in Conference A.