The Blues, meanwhile, extended their winning run in the Pro14 to five matches.

The win virtually secured the Welsh region a place in next season's European Champions Cup competition but they still remain five points behind the Cheetahs in Conference A with three games remaining as the two sides battle it out for a play-off spot.

Ulster's response was four penalties from scrum half John Cooney and a consolation try from David Shanahan.

Blues made an explosive start to take the lead inside the opening two minutes. A flowing move stretched the Irish defence, with Evans taking advantage to sidestep two opponents and score.

The outside half converted before Cooney put Ulster on the scoreboard with a penalty from 45 metres.

Cardiff then suffered an early injury blow when Matthew Rees was forced off with a leg injury but they soon overcame the setback to score an impressive second try.

A well-timed pass from Rey Lee-Lo sent Matthew Morgan through a gap before the supporting Tomos Williams floated a long ball to Scully, who raced over.

Ulster were awarded another kick-able penalty but elected for an attacking line-out and it proved to be the wrong option as an infringement allowed the hosts to relieve the pressure. 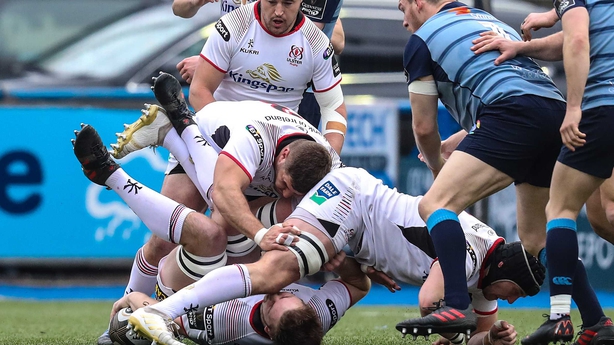 Ulster's woes continued when prop Wiehahn Herbst was yellow-carded for carelessly diving into a ruck to make contact with the head of Evans, who received treatment before departing for an assessment.

Blues appeared to have capitalised on Herbst's absence when Tomos Williams crossed after Willis Halaholo had split the Ulster defence but the try was ruled out as Steve Shingler's pass to the centre was deemed forward.

Cooney and Evans, who had returned following his assessment, then exchanged penalties to leave Blues with a 17-6 half-time advantage.

Cooney reduced the deficit with two penalties as his side dominated the opening period of the second half, but it was Blues who scored the next try.

Excellent ball retention saw Evans create the space for Dacey to score and Blues led 22-12 going into the final quarter.

Cooney missed with a long-distance penalty before Evans knocked over two for the Blues. More magic from him created the bonus try for replacement Lewis.