Victory ended the Dark Blues' two-year wait for a NatWest 6 Nations away win and ensured a campaign that started off with so much expectation did not finish with a whimper.

Having suffered defeat in Cardiff and Dublin, the Scots were under pressure to prove they could come up with the goods on foreign soil.

And they just about managed it as Fraser Brown, John Barclay, Sean Maitland and Stuart Hogg all crossed over before Laidlaw's kick sealed their first bonus-point win.

Yet the hosts pushed them close with Tommaso Allan scoring twice either side of Matteo Minozzi's touchdown. 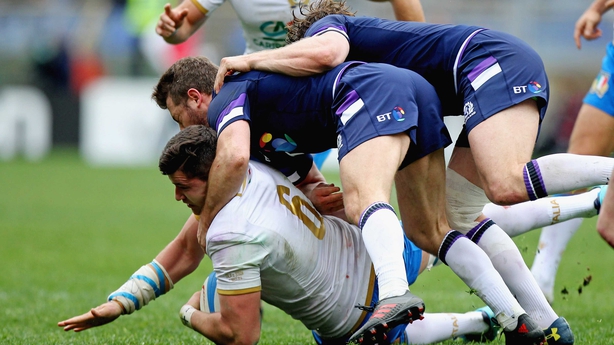 Over 5,000 Scotland fans had caused gridlock on the streets of the Italian capital before kick-off as they joined a march in aid of Doddie Weir's motor neurone disease charity.

But neither side had much trouble cutting through the traffic on the pitch as they both struck twice in the opening half.

Scotland were first to cross over after nine minutes as they responded to an early Allan penalty. Nick Grigg and Tommy Seymour both made ground before Finn Russell snaked his way towards the posts. Hamish Watson then spotted Brown in a ludicrous amount of space for him to finish off in the corner.

The Azzurri hit back in stunning fashion after 14 minutes.

From a line-out drive, they worked the ball inside for Allan, who sold Huw Jones with a cute dummy before scampering in to dot down.

They spotted another hole in the Scots' defence seven minutes later when full-back Hogg moved into the defensive line, allowing Allan to drop the ball into the space behind with Minozzi beating Watson in the footrace to score. 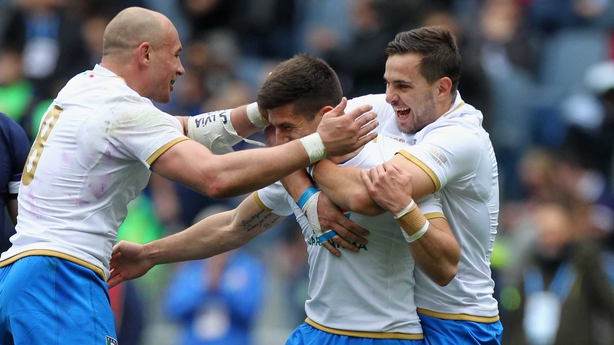 Scotland reacted after 25 minutes as they set up a driving maul 15 yards out. With the Italians creaking, wing Seymour joined the forwards as they drove the hosts back over their own line as Barclay got the ball down.

The Scots had been guilty of three horror mistakes as they lost in Dublin last weekend and made another blunder as Maitland dropped the ball as the line came into sight.

And there were more errors as Italy scored their third try just four minutes into the second half.

Zander Fagerson dropped the ball on his first carry after coming on at half-time. Ryan Wilson should then have got to grips with Jake Polledri as the big flanker countered but let him slip through as Allan then darted in for his second try.

Scotland needed a spark and got it in unlikely circumstances as playmaker Russell limped off. He was replaced by scrum-half Ali Price as Laidlaw shifted to 10 but the change gave Scotland fresh tempo, with the duo playing a key role as the visitors worked the space for Maitland to run in after 62 minutes and cut the deficit to five. 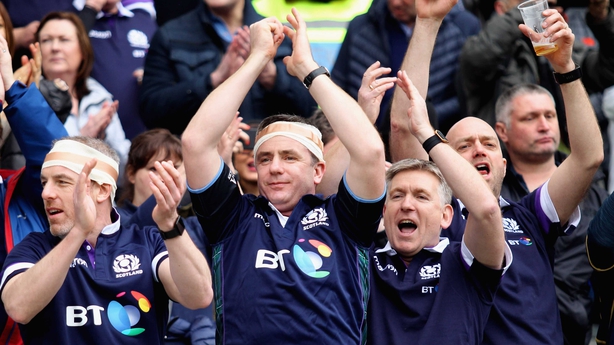 And some exceptional work by the forwards set up their fourth as another 30-yard line-out drive put Italy on the retreat before Laidlaw slotted in Hogg to score.

Laidlaw's conversion put Scotland back in front - but Italy immediately regained the lead with an Allan penalty after Jonny Gray was penalised at the breakdown.

Yet there was no return of the Scots' travel sickness as Laidlaw nailed a last-minute penalty to secure victory.