Ireland are in celebration mode after claiming the Six Nations title and The Big Cheese is the man pumping out the tunes.

Otherwise known as James Ryan, the 21-year-old lock forward was the top ball-carrier (15) for Ireland in their 28-8 win over Scotland, which, combined with England's failure in Paris, has handed Joe Schmidt's side the NatWest 6 Nations title with one game to go.

And teed up a Grand Slam tilt in Twickenham on St Patrick's Day.

With France leading England 16-9 Dan Leavy found himself answering questions in the mixed zone at the Aviva Stadium.

What's happening in there?

"James Ryan 'The Cheese' has got the tunes playing, which is always good," said the Ireland flanker.

"U2 was on for a bit, a bit of Daft Punk so yeah, we are enjoying ourselves.

"I think that could be his dad's influence on him but he loves rap, he's got an eclectic mix." 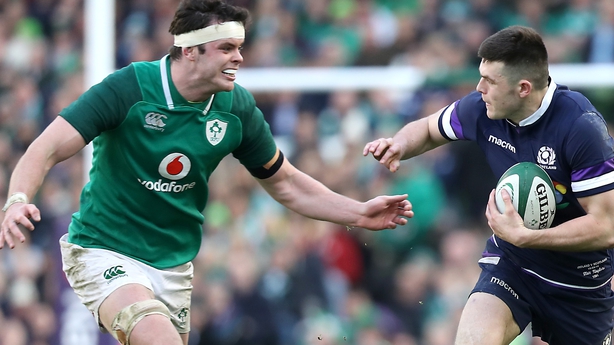 Earlier Joe Schmidt had seen the scoreline when England led 9-6 saying: "That's great, they can kick all the goals they want, just no tries.' Asked if the Champagne was on ice? The boss shook his head and smiled: "No Champagne"

That may have all changed now.

When the music dies down, all attention will turn to London next week where Ireland will attempt to claim just a third Grand Slam in their history, adding to the 1948 and 2009 clean sweeps.

It will be a new venue for Leavy, who has never even visited the famous stadium as a fan, but his casual reply suggests it won't hold any fear.

"I've never been there," said the Leinster player, another one who could have taken the man of the match award without anyone blinking an eye.

"It's all the same," he added. "Last year England came over to us and we tried to muddy up their celebrations, so I’m sure they’ll try to do the same to us. We have to be prepared."